Champion Butcher Tomos Is A Cut Above The Rest 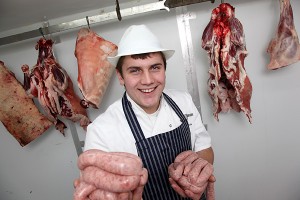 Eighteen year old Tomos Hopkin from Rhiwfawr near Swansea has proved a cut above other young butchers since he entered the meat industry at the tender age of 16.

Just three months after starting a Foundation Apprenticeship in Food Manufacture Meat and Poultry Butchery Retail Skills with training provider Cambrian Training Company, he won the coveted Welsh Young Butcher of the Year title, which he went on to retain last year.

Later this month, he will be going for a hat-trick in this year’s competition at the Royal Welsh Winter Fair in Builth Wells. Added to his list of honours is the Grand Slam British Young Butcher of the Year title, which he won this summer by beating rivals from England, Scotland and Northern Ireland.

He was also chosen by Cambrian Training Company to demonstrate his skills in an international butchery showcase at the WorldSkills event in London last month.

Now he has been shortlisted for a prestigious national award that recognises the outstanding achievements of learners, employers and providers involved in the delivery of quality apprenticeships across Wales.

Tomos is one of 19 finalists in six categories of the Apprenticeship Awards Cymru, organised by the Welsh Government in partnership with the National Training Federation Wales (NTfW). He is contesting the Young Apprentice of the Year award.

The winners will be announced at a high profile presentation ceremony at the Mercure Cardiff Holland House Hotel, Cardiff on Wednesday. November 16. Main sponsor of the awards, which aim to showcase excellence in skills development in Wales, is Pearson and media partner for the event is Media Wales.

His Foundation Apprenticeship completed, he is progressing to an Apprenticeship having launched his own business, Gwyrhyd Mountain Meat, making door to door sales of quality Welsh Lamb, Welsh Beef, pork, chicken and turkey from the family farm.

“Doing the meat round makes the farm more profitable and it’s very rewarding getting good feedback from customers,” he said. “Without the apprenticeship, I wouldn’t have the qualifications and skills to be running my own business.

“I would definitely recommend an apprenticeship because you earn while you learn and you end up with a trade. Being selected as a Apprenticeship Awards Cymru finalist was a big shock because I didn’t think I stood much of a chance.”

Around 250 stakeholders from the vocational education and training sector across Wales are expected to attend the high profile awards ceremony, where guests will dine out with chefs from the Welsh National Culinary Team.