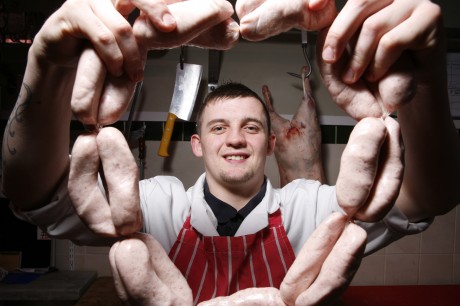 Talented young butcher Tomi Jones, who has already proved he’s a cut above the rest in his vocation, is in the running for a national award.

As a result of her learning success, the 22-year-old, who runs Jones’ Butchers in Llangollen, has been named a finalist in the EU-backed VQ Learner of the Year Award. The final takes place on June 5 – VQ Day – at a ceremony to be held at Coleg Morgannwg, Nantgarw in South Wales.

He will be up against Helen Wynne, who runs Blythswood Childminding Services in Wrexham and former Cardiff and Vale College student Leo Hacker, who now works for Royal Garden Hotel, Kensington, London.

Tomi, who won the Welsh Young Butcher Competition 2012 last December, has also been selected to represent Wales in The National Federation of Meat and Food Traders’ Premier Young Butcher competition at the NEC Birmingham on July 2.

He is looking forward to the challenge of facing the best in Britain in a three and half hour competition with five elements and is delighted to be a VQ Learner of the Year finalist.

“Winning these competitions would be my greatest achievement and would definitely put me on the map,” said Jones, who is already somewhat of a local celebrity, having been filmed this year for S4C’s ‘Cegin Bryn’ with chef Bryn Williams and cbbc’s ‘Disaster Chefs’ with Joe Swash.

Jones was nominated for the VQ award by his training provider, Cambrian Training Company, based in Welshpool. His training officer Trevor Davies and the company’s head of curriculum for food manufacture, Chris Jones, are coaching and mentoring him in the run up to the Premier Young Butcher competition.

The third generation of his family to run the butcher’s business, he is passionate about the industry and promoting butchery as an interesting and rewarding career for young people.

“Tomi has achieved excellence in a short period of time and is an inspirational example to other apprentices,” said Chris Jones. “He has only been in the industry for four years yet has achieved so much, including 40 gold awards for excellence in his products.”

Wales’ Deputy Minister for Skills and Technology, Jeff Cuthbert said: “ It’s important that vocational qualifications become, and remain, first choice options for our brightest and best learners and that their worth is fully recognised. VQ Day plays a key role in securing that objective.