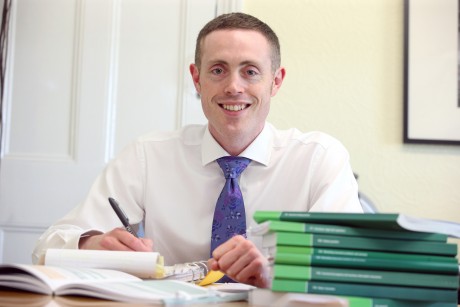 Paul Wiggins is a firm believer in leading by example. Working for BPW Insurance in Newport he began his Apprenticeship in General Insurance in November 2011, completing it within 12 months, passing all the required exams first time.

But that was not the end of the story. Just because he had achieved his apprenticeship did not mean he wanted to end his professional development.

Far from it; his next goal was an Advanced Diploma in Insurance and to become a Chartered Insurance Broker, which he achieved in two years instead of the standard five years.

“It is extremely important for me to achieve as high as I can and to lead by example. Continuous development is important no matter what level you’re at in business. My view is that you have to keep sharpening the sword and always look to improve,” he said.

Paul is heavily involved in the regulatory side of the business. “I feel that having the relevant qualifications and experience gives me the authority to deal with the regulator, demonstrating I know what I’m doing and talking about” he said.

In 2014/2015, Paul was president of the Cardiff branch of the Chartered Insurance Institute’s (CII) ‘Young Professionals Group’. Through his role as president, Paul was keen to promote the need for continued development and vocational qualifications. He also continues to provide support to other young members within the group.

Paul was named the CII ‘Young Achiever of the Year’ for 2014/2015 and also won one of 10 national places on the CII’s ‘New Generation Programme’.