Michael at the reins for a dream career working with horses 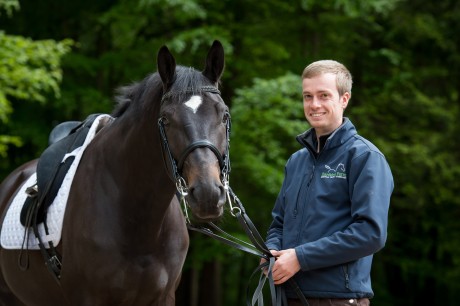 Michael Whippey at work with horses.

Michael Whippey’s love of horses has taken him from his home in Aberdare via a world famous English riding school to an equestrian centre in Buckinghamshire where he has recently been promoted to chief instructor.

Along the way the former Bridgend College learner has collected a string of vocational qualifications with a view to establishing his own equestrian training school in the future.

Michael’s love of horses began when he started riding at the age of five and has been totally focused on an equestrian career since leaving school.

He obtained a BTEC National Diploma in horse management with triple distinctions and a British Horse Society assistant instructor certificate at Bridgend College’s Pencoed Campus. The qualifications helped him secure a job at the world famous Talland School of Equitation, near Cirencester where he achieved the BHS intermediate instructor certificate and became yard manager.

After gaining more experience at competition yards in Suffolk, he joined Shardeloes Farm Equestrian Centre, Amersham where he ran the hydrotherapy yard before being promoted to chief instructor in February.

He had to wait until last year, when he turned 22, before he could take the BHS Senior Equitation exam, which he passed first time. He will become one of the youngest qualified instructors in the country if he passes the final BHS Coaching exams this month.

“My advice to anyone who is leaving school and choosing a career is to do something that they love doing,” said Michael, 23. “I never feel like I’m going to work. It’s more of a lifestyle and passion.”

Sarah Allen, Curriculum Manager at Bridgend College, who nominated him for the award, said: “What is truly outstanding about Michael is the level he has achieved at just 23 years old.”