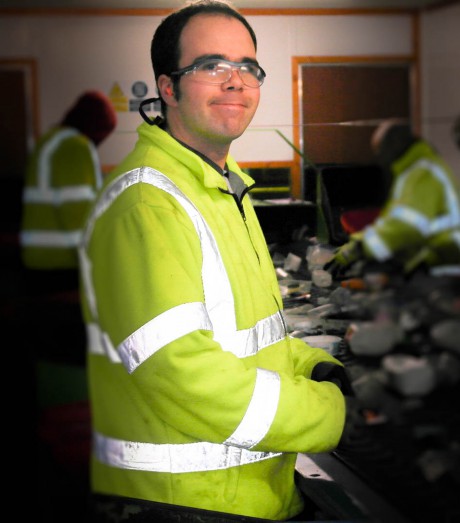 Dafydd Emrys – working towards a foundation apprenticeship through the medium of Welsh.

A plastics technician at a North Wales recycling centre is benefiting from the Welsh Government’s drive to deliver apprenticeships through the medium of Welsh.

Dafydd Emrys, 34, is employed at social enterprise Antur Waunfawr’s Caergylchu site in Caernarfon. Dafydd is on the autistic spectrum and found that he was struggling to complete his work in English when he began an essential skills assessment to discover if he was suited to a Foundation Apprenticeship in Recycling (NVQ level 2).

Training officer Amy Edwards, from Cambrian Training Company, found that Dafydd better understood the assessment questions when they were in Welsh, his first language, rather than in English.

Dafydd’s father, Emrys Reid, therefore asked if the Foundation Apprenticeship could also be delivered in Welsh and Cambrian Training Company duly obliged and translated his workbooks for him. Dafydd is one of seven staff working towards the qualification, but he’s currently the only one doing it in Welsh.

Antur Waunfawr’s manager Haydn Jones, Amy and Emrys have all vowed to help Dafydd with the qualification if he needs extra support.

“Dafydd struggles to process certain English words but finds the course much easier to understand in Welsh,” said Haydn. “I think it’s fantastic that Dafydd has opened the door for others in the future who want to do the NVQ in their native tongue.

“Cambrian Training Company has been very supportive of Dafydd right from the start which has enabled him to get on the course and they have made the learning process a lot more manageable and effective for him.”

Amy is confident Dafydd, who has GCSEs in Maths and Art, will complete the qualification alongside his workmates. “He is doing very well so far and his answers always meet the criteria,” she said. “He is very passionate about recycling.

“We talk through all our sessions in Welsh and joke that he is helping me improve my Welsh because it’s my second language. It’s the first time Cambrian Training Company has delivered a qualification in sustainable resource management in Welsh because nobody had asked previously.”

She praised Antur Waunfawr for employing, supporting and integrating people with learning disabilities and said she would be nominating the company for one of Cambrian Training Company’s Employer of the Year awards in 2018.

The Welsh Government is keen to increase opportunities for learners to undertake an apprenticeship through the medium of Welsh or bilingually. It wants to ensure that all learners have the opportunity to maintain and develop their Welsh language skills.