Darren happy to break the mould with career in childcare 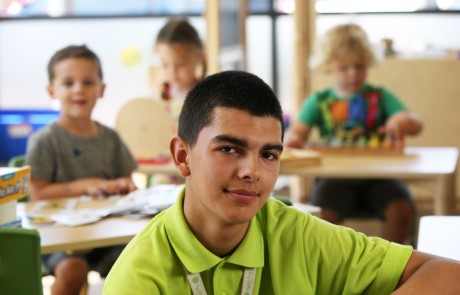 Darren Watts’s career change to childcare has paid off.

Darren Watts has turned a natural gift of supporting siblings and younger cousins into a promising career. In doing so, the 18-year-old has taken the unusual step of moving from a path in the construction industry to childcare, happily breaking the mould in a predominantly female profession.

But with the support of ACT and his mum, he took the brave decision to retrain in childcare where he has excelled, completing Level 1 Traineeship in Childcare while on placement with Appletree Day Nursery, Cardiff and now moving onto a Level 2 apprenticeship having been recruited by the nursery.

The career change has seen Darren, who lives in Butetown, Cardiff, shortlisted for the Traineeship Learner of the Year (Level 1) award at this year’s Apprenticeship Awards Cymru, which take place at Venue Cymru, Llandudno on October 20.

Darren’s line manager at Appletree, Laura Edwards, said: “Darren has an excellent manner with the children, the parents love him and he’s flexible and reliable. A male in a nursery setting is unusual but he is a positive role model for the boys.”

Darren said: “I would like to thank ACT, my mum and Appletree. My ambition is to qualify in childcare but long term I would love to open my own nursery.”

Jayne McGill-Harris from ACT Training said: “The Traineeship has helped Darren grow his confidence. He is a young man who knows what he wants and is happy to break the mould.”

Wales’ Minister for Skills and Science Julie James congratulated Darren and the other 32 shortlisted award finalists. “We are proud to be delivering a number of successful vocational training programmes with success rates for apprenticeships in Wales remaining well above 80 per cent,” she said.