Awards finalist Cassidy described as “a triumph of human spirit” 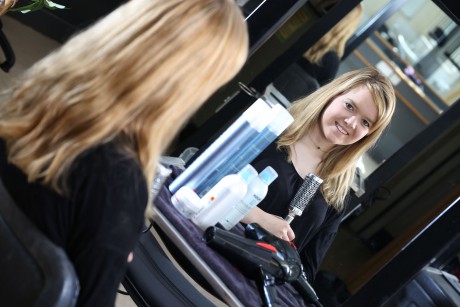 Cassidy Jones has set her sights on a career as a hair stylist. For the 17-year-old who has faced up to immense difficulties in her life, this goal will be an amazing achievement.

The death of her father when she was young and being bullied at school impacted her academic record.

But she took her interest in salon services at school to the next step through the Traineeship Engagement programme with Grŵp Llandrillo Menai with a Level 1 NVQ certificate and Essential Skills qualifications which has seen her shine on placement at Shades, a small nurturing salon and then with HQ salon in Bangor where she is developing greater skill sets before progressing to a Foundation Apprenticeship.

Now Cassidy, who lives in Bethesda, has been shortlisted for the Traineeship Learner of the Year (Engagement) award at this year’s Apprenticeship Awards Cymru, which take place at Venue Cymru, Llandudno on October 20.

“I have had to deal with things no other young person should have to face but the Traineeship has made me feel more positive,” said Cassidy. “For many years there were bad things in my life that I wanted to stop. Now I want to move on.”

Grŵp Llandrillo Menai’s engagement team leader Eric Christie said: “Working with Cassidy is humbling. She is amazing and has found answers to her problems while remaining calm, polite and hardworking. What a triumph of human spirit.”

Wales’ Minister for Skills and Science Julie James congratulated Cassidy and the other 32 shortlisted award finalists. “We are proud to be delivering a number of successful vocational training programmes with success rates for apprenticeships in Wales remaining well above 80 per cent,” she said.