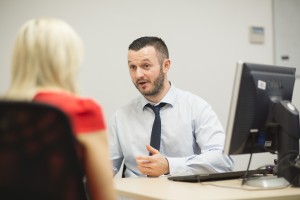 A dedicated employee of the DVLA in Swansea, who is working towards a qualification for human resource management professionals, has been shortlisted for a prestigious national apprenticeship award.

Luke Godrich, 30, from Morriston, Swansea, Is a finalist in the Higher Apprentice of the Year category at the Apprenticeship Awards Cymru 2014 and will be attending a high profile awards ceremony at the Celtic Manor Resort, Newport on Friday, October 31.

The awards, split into 13 categories, are organised jointly by the Welsh Government and the National Training Federation for Wales (NTfW).

Luke has had to balance his personal life of half-marathon training and shared responsibility for bringing up his seven-year-old daughter Ruby with the demands of an intensive two-year Higher Apprenticeship programme.

Although he has been with the DVLA for nine years, it was only in 2012 that he was selected for the company’s Talent scheme. This has involved nine modules at Swansea’s Gower College leading to an NVQ Level 5 and a CMI level 5 extended Diploma. Luke is working towards his CIPD, a qualification for human resource management professionals.

“Being a single parent to a beautiful daughter, training for my half-marathons and my work as an adult learner has meant me having to be organised, disciplined, dedicated and determined to succeed,” he said.

This dedication has led him to a new role with the Department of Transport with greater responsibilities and due to the impact he has made, his department has been nominated for an award and scored impressively in the staff satisfaction surveys.

“I would hope that recognition of my experiences would inspire others to look at an apprenticeship as a way to achieve their career goals,” he added.

Deputy Minister for Skills and Technology, Julie James, said: “Higher Apprenticeships can have just as much to offer as a place at a top university and it’s clear that more and more learners in Wales are opting for this route. Between 2012-‘13, 2,275 Higher Apprenticeship places were created in Wales compared to just 280 in 2011/12.

“Thanks to his Higher Apprenticeship, Luke is now rapidly progressing in his chosen field. He is a fantastic role model for young people who are considering a similar career and I’m delighted that he is being recognised in this way.”

More than 400 key stakeholders from the vocational education and training sector across Wales are expected to attend the high profile awards ceremony, where guests will dine out with chefs from the Culinary Team Wales.