Deputy Minister’s “parity of esteem” commitment for apprenticeships in Wales 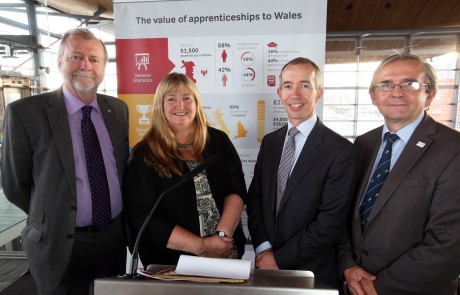 Launching the report are (from left) AM Jeff Cuthbert, Deputy Minister for Skills and Technology Julie James, Ross Flanigan from Deloitte and NTfW chairman Peter Rees.

Deputy Minister for Skills and Technology Julie James has pledged her personal commitment to ensuring parity of esteem between apprenticeships and academic qualifications in Wales.

Speaking at the launch of ‘The Value of Apprenticeship to Wales’, a report commissioned by the National Training Federation for Wales (NTfW), at the Senedd in Cardiff she also pledged the Welsh Government’s “absolute commitment” to prioritising apprenticeships in Wales, which she described as the “gold standard” for vocational education.

NTfW, which represents the country’s work-based training providers who deliver Apprenticeships for the Welsh Government, used the launch to call for parity of esteem and opportunity for young people in Wales and for funding to provide more apprenticeship places.

The Deputy Minister commended the NTfW for commissioning the report from Arad Research, which brings together available research on apprenticeships from a variety of sources for the first time.

“It really does bring home the message about what apprentices and apprenticeships can do for our economy here in Wales,” she told an audience comprising Assembly Members, training providers, employers and apprentices. “It really is quite inspirational.

“We know that apprenticeships are the future our country, our economy and our growth. It is no accident when I speak to captains of industry here in Wales that many of them started their route to success with an apprenticeship.

“It is wrong to think that it hasn’t got the same strength as the academic route and, in many ways, it’s a faster route to the top. I make a personal commitment to cracking the parity of esteem position.”

The report revealed that apprenticeships in Wales generate more than £1 billion a year for the country’s economy and represent excellent value for money for Welsh Government investment.

NTfW chairman Peter Rees said: “Frankly it is a disgrace that apprenticeships are still being considered by some key influencers as the route primarily for the ‘average’ or ‘less academically able’ learner. Our employers need our gifted and talented young people to enter employment earlier.

“This report builds upon a growing body of evidence that highlights the value of apprenticeships and suggests that we need a rebalancing in some aspects of the post 16 and post 19 mix of education and training opportunities.”

With National Assembly of Wales elections due next year, the NTfW called on all political parties and policymakers to ensure that young people have the right pre-16 opportunities to experience the world of work and the opportunity to follow a vocational route through education into employment.

“In these challenging times of decreasing funding at government level, we urge all parties and policymakers to review the resourcing of education and training, particularly post 19 to ensure that those resources are used effectively to the benefit of our young people, our economy and Wales,” he said.

“There has to be a better way of supporting the transition from schools to high level and high skill employment and, for that matter, a better way of using resources so that we can support upskilling in employment. We feel the better way is through apprenticeships.”

The launch reception was sponsored by AM Jeff Cuthbert, who said he had been proud to support Wales’ successful apprenticeship programme during his time an Assembly Member. He had seen first-hand how apprenticeships benefit the learner, employer and the wider economy.

Ross Flanigan, a director of financial and professional services business Deloitte in Cardiff, said the company had traditionally recruited mainly through a graduate recruitment scheme, but he had just taken on the first 10 business administration apprentices, in partnership with Cardiff and Vale College. They were due to start work on Monday.

“We have found a tremendous group of apprentices,” he said. “My personal advice to employers in any sector is definitely to consider apprentices for your business. It is a great thing to do for young people. We at Deloitte don’t see them as a training burden, we see them as an asset from the start and an investment in the future of our business.”