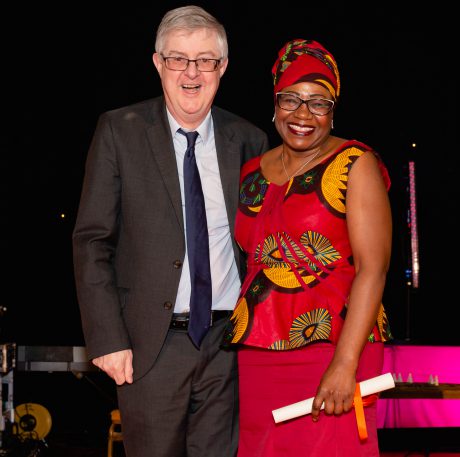 Equality and diversity campaigner Humie Webbe has spent her life dedicated to helping people from Black, Asian and Minority Ethnic (BAME) communities achieve a voice – and her tireless efforts have been recognised with two prestigious awards.

At the Ethnic Minority Welsh Women Achievement Association (EMWWAA) Awards Humie was honoured for her outstanding work and commitment to promoting and inspiring people in BAME communities in Wales.

As the strategic equality and diversity lead at the National Training Federation for Wales (NTfW), Humie encourages and engages with people BAME communities and those with disabilities across Wales to promote the opportunities afforded by apprenticeships.

A founding member of Black History Month Wales alongside late celebrated Cardiff headteacher, Betty Campbell; Humie has been named among the most influential African Caribbean and African Welsh people, and in 2000 was included in the Western Mail’s power list of 1,000 most influential people in Wales.

Working with a cross-section of public bodies, organisations, education and community groups, Humie uses her wealth of experience and extensive contacts to bring people together to create more awareness and opportunities for people in BAME communities.

She is passionate about expanding people’s horizons and promoting training and career pathways for people in BAME communities in Wales. Also, as a mentor with the EYST Wales (Ethnic Minorities & Youth Support Team) engagement programme, she is helping people develop political skills and increase their impact in public life.

Humie was joint recipient with Ethnic Minority and Youth Support Team’s (EYST) director Rocio Cifuentes of the EMWWAA ‘Social and Humanitarian Award’, which recognises a woman who has “significantly improved or enriched the lives of others, or generally helped society as a whole, or helped facilitate the integration of different cultures through their charitable and community-based endeavours.”

Despite having held such important positions, and having been at the forefront of many initiatives that have helped change people’s lives, Humie is very modest about her contribution. 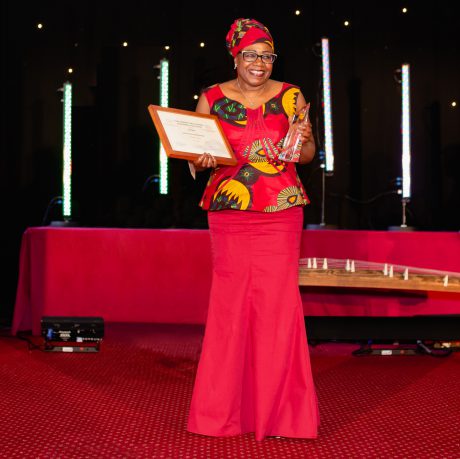 “I’m not very confident in putting myself forward, because I just do what I do,” says Humie who was nominated for the EMWWAA awards by a colleague.

“It was such a great honour to be nominated alongside women I know have done some incredible things. I received the awards for a combination of things I have done over the years. But you don’t stand alone in your achievements; you work with other people. It was fitting that some of my colleagues involved in equality and diversity were also nominated.”

On taking up her role two years ago with NTfW, Humie hit the ground running – organising events and using her considerable networking abilities to bring apprenticeships to a hitherto underrepresented audience.

She hopes having received the EMWWAA awards, and through her ambassador’s role she will be able to engage with even more people and “open more avenues for conversation and create opportunities for people to enter into strategic partnerships.”
The enthusiasm she believes is there but is not necessarily matched by an awareness of the opportunities.

“When I speak to people about apprenticeships they are so interested, however, a lot of people don’t know they exist. But it cannot be a one-sided narrative.”

In addition to jointly receiving the EMWWAA Social & Humanitarian Award Humie was named as the recipient of one of three EMWWAA Rhodri Morgan Ambassador Awards, which were presented in memory of the late First Minister.

Humie received the award along-side Iolanda Banu Viegas and Shavannah Taj and said she intends to use it to further advance her work.

“We are the first recipients of this award, and it is such an honour. Rhodri Morgan did so much for the BAME community.”
Said Race Council Cymru chief executive Uzo Iwobi OBE, “The role of ambassador for EMWWAA is a highly prestigious and vital
part of ensuring that many unsung heroines from diverse minority ethnic backgrounds are discovered, recognised, nominated and celebrated.

As Ambassador, Humie will shine the light and encourage many to nominate women who are positive role models and agents of change in Wales.”

Professor Meena Upadhyaya, founder and chair of the EMWWAA said there had been a large number of entries from so many ‘exceptional individuals’ across Wales.

“This year, the judges chose to honour Humie Webbe, Iolanda Banu Viegas and Shavannah Taj, and we look forward to them as ambassadors continuing to discover and showcase women from Wales, who are unsung heroines.

“The Awards are designed to tell these awe-inspiring stories to uplift women everywhere and say thank you in a very small way for all they do. We look forward to working with Humie and the other Ambassadors in 2019.”

Sarah John national chair NTfW said, “We are delighted that Humie’s achievements have been recognised by the EMWWAA. Since joining NTfW, Humie has made a hugely positive impact on the awareness and uptake of apprenticeships by people from the BAME community in Wales.”

If you would like to know more about EmWWAA go to www.emwwaa.org.uk