Dream career leads to a national learning award for Nicole 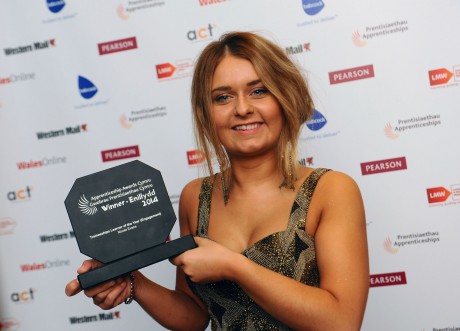 Nicole Evans with her award.

A talented learner from Coleg Menai, who found her dream career literally by accident, has won a prestigious national award.

“Oh my God,” was her initial reaction. “Winning this award means a lot to me. It’s going to boost my confidence and it proves that I am good at something.”

Organised jointly by the Welsh Government and the National Training Federation for Wales (NTfW), the awards showcase excellence in skills development in Wales by learners, employers and learning providers. Sponsor was Pearson PLC and media partner was Media Wales.

Fracturing her spine in a fall from a window unexpectedly helped Nicole to discover an exceptional talent after she had initially enrolled at Coleg Menai on a hairdressing course. As severe back pain caused by the injury made hairdressing impossible, she reluctantly gave up and decided to try catering instead.

Starting the Traineeship was like “flicking a switch”, says Nicole and it soon became clear that she had a real talent for cooking. Her flair was recognised at the Anglesey Arms Hotel in Menai Bridge during a placement and she now works there full-time, developing her skills and gaining qualifications.

“I couldn’t think of a better place to work,” she said. “As soon as I started catering my life really took off. I had some really difficult times after my accident but the course has given me everything I need.”

Deputy Minister for Skills and Technology, Julie James said: “Apprenticeships are a great way to start a successful career. You earn while you learn and gain nationally recognised qualifications. Another feature is receiving support from both your employer and training provider, making sure you get career guidance whilst learning skills. I wish Nicole every success in her career.”