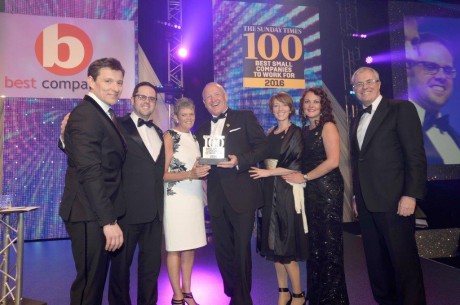 Educ8, a provider of learning and staff development services, has been announced as the top Welsh company to work for in the 2016 Sunday Times best small companies list.

Split into four categories, big companies, mid companies, small companies and not for profit organisations, Best Companies have been producing and publishing the prestigious ‘Best Companies to Work For’ lists since 2001.

Over 300 organisations are included in the lists, which measure and acknowledge excellence in workplace engagement.

Colin Tucker CEO of Educ8, said: “We are delighted to be named as the top Welsh small company to work for in the UK and achieve 3rd place overall. In 2014 we were placed at number 51 so it’s a real jump up the ranks for us this year, which is testament to everyone’s hard work and we are immensely proud of what we have achieved and all of our people.”

Educ8, one of Wales’ leading and fastest growing training and work based apprenticeship providers, attended the announcement evening at Battersea Park after being awarded the coveted three star status accreditation from Best Companies for the second year.

Colin continued: “We have a mission to make a positive impact on the social and economic future of our communities through developing, empowering and inspiring individuals to achieve their true potential. This accolade proves that we are successful in this aspect not only with customers, but employees too.”

Grant Santos, managing director of Educ8 said “It was fantastic to be invited along to the event and when we found out how highly we’d placed we were all so proud and ecstatic. We want our employees to enjoy their work and feel they have all skills they need to do their job to the best of their ability.”