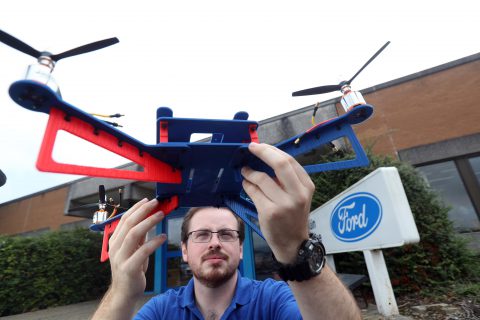 Ryan Brown has a thirst for learning.

When production operator and team leader Ryan Brown was made redundant by Ford Motor Company’s Bridgend plant due to a product run end, he recognised it as a golden opportunity to retrain.

He applied for and secured an Apprenticeship on Ford’s electrical training programme and loves his new job programming and working with robots, providing breakdown cover and finding ways to save the company money.

Ryan, 26, who lives in Porthcawl, has helped establish an Emerging Technologies department at the Bridgend Engine Plant, taking on a leading role in additive manufacturing. The department is seeking to cut costs and Ryan has used a 3D printer to make one component that is set to save the company £29,340 a year.

As a reward for his learning journey, he has been shortlisted for this year’s Apprenticeship Awards Cymru. He will be competing to become Apprentice of the Year at the prestigious awards ceremony at the Celtic Manor Resort, Newport on November 9.

Before starting his apprenticeship, Ryan had achieved a Certificate of Higher Education in Electronic and System Communication Engineering from the University of Wales, Newport.

He has started his fourth and final year’s training to achieve an Electrical Maintenance Apprenticeship. Next summer, Ryan will complete the final year of his HNC in Electrical Engineering at Bridgend College and his BEng degree in Manufacturing Systems Engineering at the University of Wales, Trinity St David’s in Swansea. He then has a Master’s Degree in Engineering in his sights.

“I was fortunate enough to be accepted as an apprentice and have since seized every available opportunity to expand my knowledge and understanding of advanced manufacturing processes and the systems surrounding them,” said Ryan, who volunteers in his spare time.

Alison Bladon, Ford Motor Company’s HR officer for learning and development, said: “Ryan has a keen interest in automation, digital technologies, 3D printing and virtual reality, all important applications that will not only help the company in the future but will also help him progress in his chosen career.”

Congratulating Ryan on being shortlisted for an award, Minister for Welsh Language and Lifelong Learning, Eluned Morgan said: “Apprenticeship Awards Cymru showcase the success of the Welsh Government’s Apprenticeships and Traineeships Programmes and the achievements of our star apprentices, employers, learning providers and trainees.
“Apprenticeships are a great way for individuals to gain valuable skills and experience while earning a wage and for employers to ensure their workforce has the skills to future proof a business.
“Increasing higher level skills and developing skills pathways that benefit the whole of Wales have never been more important.”