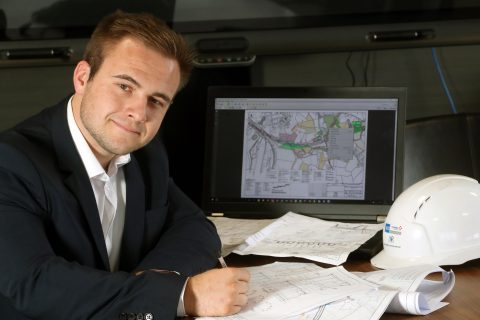 Russell Beale is no stranger to award success as he sets his sights on becoming a Chartered Civil Engineer.

The 21-year-old from Pontypool, who was the CITB 2017 Wales Apprentice of the Year, works for VINCI Construction Grands Project and is currently taking a lead role in preparations for the M4 relief road at Newport.

Through training provider CITB, Russell has achieved an Apprenticeship in Civil Engineering for Technicians alongside a Btec Diploma Level 3 in Construction and the Built Environment. He is now studying for a HNC and will advance to a BEng (Hons) degree at University of South Wales on day release from work, with completion due in 2021.

Now he has been shortlisted for this year’s Apprenticeship Awards Cymru. He will be competing to become Apprentice of the Year at the prestigious awards ceremony at the Celtic Manor Resort, Newport on November 9.

During his apprenticeship, he managed a college group project to design a multi-purpose development, which was recognised as “outstanding” and he currently mentors other apprentices.

Neil has used his knowledge to modernise techniques and procedures at work as well as producing training manuals and presentations and leading training sessions for colleagues. He attends courses and seminars and researched new civil engineering projects to discover new techniques and examples of good practice.

Sharing his skills in the workplace, he has produced 3D construction models and loaded data onto i-Pads to help site workers to see what the final project should look like.

“Throughout my apprenticeship I have made a 100% commitment to become a fully qualified civil engineer,” said Russell. “I feel that I have a long career journey ahead and intend to go as far as I possibly can.”

Praising Russell’s “outstanding commitment”, Stephen Bullock, CITB apprenticeship officer, said: “Russell came to the CITB with little knowledge of civil engineering but over the two years has worked endlessly to be where he is today.”

Congratulating Russell on being shortlisted for an award, Minister for Welsh Language and Lifelong Learning, Eluned Morgan said: “Apprenticeship Awards Cymru showcase the success of the Welsh Government’s Apprenticeships and Traineeships Programmes and the achievements of our star apprentices, employers, learning providers and trainees.
“Apprenticeships are a great way for individuals to gain valuable skills and experience while earning a wage and for employers to ensure their workforce has the skills to future proof a business.
“Increasing higher level skills and developing skills pathways that benefit the whole of Wales have never been more important.”