From fish and chip shop to flourishing IT career 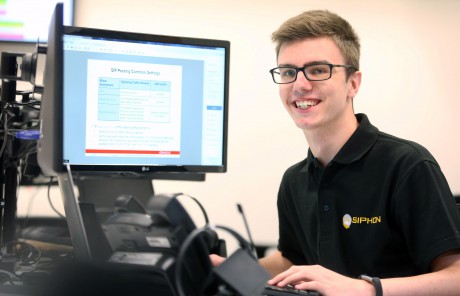 Niall Perks has used the apprenticeship programmes to develop a new career in IT.

Niall, 20, took up his apprenticeship when he decided that real-world education was a better choice for him than going to university. Since then, he has progressed from a part-time job in a fish and chip shop to a promising IT and telecoms career where he brings an innovative approach, adding value for customers and his employer.

As a reward for his success, he has been shortlisted for the Foundation Apprentice of the Year award at this year’s Apprenticeship Awards Cymru, which take place at Venue Cymru, Llandudno on October 20.

While working on his Level 2 Foundation Apprenticeship for Cwmbran-based IT company SIPHON, Niall developed new ways of working that resolve customers’ problems faster, with an increase in the number of issues resolved per engineer. He also used his coding skills to develop a more efficient way for his boss to create monthly reports for customers.

Niall, who works as a Unified Communications Support Engineer, says his apprenticeship has given him greater self-confidence. “I have achieved more than I deemed myself capable of,” he said. “I believe that my journey as an apprentice can inspire others to see that university isn’t required to have a successful career.”

Niall’s developing IT expertise was recently recognised when he won the gold medal in the WorldSkills UK heats for Advanced Support Technicians in Cardiff. Training provider Acorn judged him ‘Learner of the Month’ in May 2016, leading a field of 1,000 apprentices across the country.

His employer’s view is equally positive. Technical Operations Director Jeff Bevins said: “Niall is an extraordinary young engineer who undoubtedly has a very bright future ahead of him.”

Wales’ Minister for Skills and Science Julie James congratulated Niall and the other 32 shortlisted award finalists. “We are proud to be delivering one of the most successful apprenticeship programmes in Europe with success rates in Wales remaining well above 80 per cent,” she said.