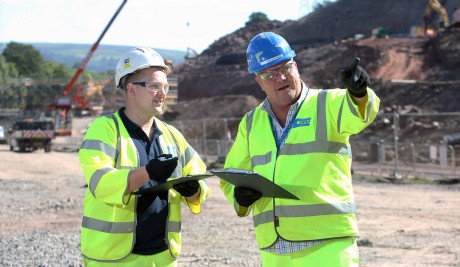 Rhys Donovan grasped the opportunity offered by the Welsh Government’s apprenticeship programme to develop a valuable career in Safety, Heath and Environment.

Rhys, 23, from Merthyr Tydfil, had been working as a construction labourer for two years when he saw the two-year construction apprenticeship with Costain Ltd, specifically for the A465 Section 2 Project in Gilwern, advertised.

His job did not provide the training opportunities he was looking for, so he relished the chance to go back to study at Coleg Gwent to work on his NVQ as part of the first year of the course. Rhys’ academic performance speaks for itself, gaining almost 100% in all of his assessments.

As a reward for his success, he has been shortlisted for the Foundation Apprentice of the Year award at this year’s Apprenticeship Awards Cymru, which take place at Venue Cymru, Llandudno on October 20.

Rhys’ academic success, along with growing experience on site, greater knowledge of construction and health and safety, has given him greater self-confidence, which he puts to good use working with local schools to encourage the next generation of construction professionals.

He has been consistently encouraged and supported assisted by his employer, and Costain have now recruited him to the role of trainee Safety, Health and Environment (SHE) advisor. This involves further study and training, and will provide Rhys with further opportunities to progress up the career ladder.

Rhys said: “Working alongside labourers and skilled tradesmen has taught me how to work with everyone to make our sites safer.”

Donna Evans, Costain’s Project Skills Coordinator, praised Rhys as a role model for others considering an apprenticeship: “He shows how successful an apprenticeship framework can be and the opportunities which occur as a result.”

Wales’ Minister for Skills and Science Julie James congratulated Rhys and the other 32 shortlisted award finalists. “We are proud to be delivering one of the most successful apprenticeship programmes in Europe with success rates in Wales remaining well above 80 per cent,” she said.