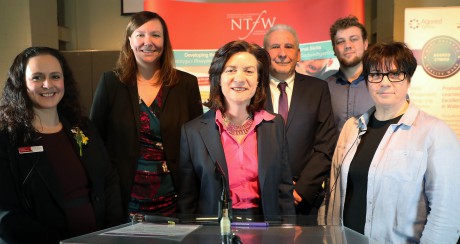 Wales’ Minister for Welsh Language and Lifelong Learning, Eluned Morgan, wants apprentices to be given a stronger voice in decisions made about apprenticeships.

Making the keynote speech at the second teaching, learning and assessment conference organised by the National Training Federation for Wales (NTfW) at the All Nations Centre, Cardiff, she told the 200 work-based learning delegates that learners were key partners in securing the success of the apprenticeship system in Wales.

“We need to find creative ways of putting the learner’s voice at the heart of the system,” said the Minister. “Learner voices will be central to future developments.”

She pledged to tackle the “huge disparity” between academic and vocational pathways in Wales. “I am determined that vocational and work-based learning will not be seen as the poor relation to academic pathways,” she said.

“A really good quality apprenticeship is as valuable, if not more valuable in terms of earning potential, than a degree.”

She thanked delegates for keeping the Welsh Government on course to achieve its target of 100,000 apprenticeships during this Assembly term, but stressed that higher quality apprenticeships were needed to support learners, employers and the Welsh economy.

It is important that young people are given the skills to consider starting their own businesses and join the thousands of other self-employed people who fuel the Welsh economy, she said.

She focused on areas requiring improvement including delivering more learning in the workplace, improving skills development and giving learners the opportunity to learn through the medium of Welsh.

Another speaker was Alex Rollason, newly elected NUS Wales deputy president, representative of the National Society of Apprentices and a Coleg Cambria engineering apprentice, who is the first apprentice in the UK to be appointed an NUS officer.

He welcomed the Minister’s comments and agreed that apprentices should have a say on apprenticeship decisions that affect them. He wants the Welsh Government to make it easier for learners to be able to switch from academic to vocational pathways easily if they realise they have made the wrong choice.

He spoke about his experience as an apprentice and said young people and their parents needed to receive better careers advice in school about all the options open to them, rather than university only.

Sarah John, NTfW chair, praised members for improving their teaching and learning practices but said there was always room for improvement and embracing wider themes. She hoped delegates would share best practice and new ideas gained at the conference with colleagues, learners and employers.

Sarah revealed that, by working in partnership with the Welsh Government, the NTfW had increased employer engagement since receiving all leads from the Business Wales Skills gateway and demand for higher apprenticeships had increased by six per cent to 22%.

There is now greater collaboration between the work-based learning network and Further and Higher Education institutions and the positive messages about apprenticeships had increased demand from learners and parents.

In line with Welsh Government policy, new apprenticeship pathways are being created, more employees are achieving higher apprenticeships and there is a greater focus on priority sectors identified by Regional Skills Partnerships.

The conference, ‘Empowering learners for future prosperity,’ is supported and part-funded by the Welsh Government.