Award-winning apprentice electrician Ifan Wyn Phillips has stressed the importance of Welsh medium and bilingual apprenticeships to promote the language to learners across Wales. 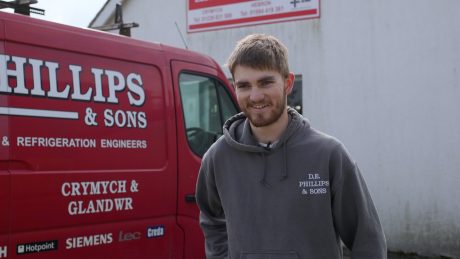 His passion for promoting bilingual apprenticeships has led to his appointment for a third year as an Apprenticeship Ambassador by Coleg Cymraeg Cenedlaethol and the National Training Federation of Wales (NTfW). He is also a Welsh language ambassador for Pembrokeshire College.

Last October, he won the William Salesbury Further Education and Apprenticeship Award at Coleg Cymraeg Cenedlaethol’s Annual Awards. The award recognises the contribution of a learner or apprentice to Welsh language life and culture within a further education college or apprenticeship provider.

Coleg Cymraeg Cenedlaethol leads the development of Welsh medium and bilingual education and training in the post-compulsory sector in Wale and the NTfW represents work-based learning providers across Wales.

Ifan’s ambassadorial role has included talking to secondary school children at Parc y Scarlets, Llanelli about his job and the benefits of apprenticeships. He also takes part in Instagram Takeovers organised by Coleg Cymraeg Cenedlaethol and the NTfW during the annual Apprenticeship Week in Wales.

“I enjoy helping to promote Welsh medium and bilingual apprenticeships and it was nice to receive the award from Coleg Cymraeg Cenedlaethol for the work I do,” he said.

“I think its very important to advertise and promote the language to get as many people as possible to learn through the medium of Welsh or bilingually.

It keeps the language and traditions alive and helps the Welsh Government to reach its target of achieving one million Welsh speakers by 2050.”

Ifan is the third generation to join the family business, D. E. Phillips and Sons Ltd, electrical contractors, which was established by his grandfather in Pembrokeshire. He works on residential, commercial and agricultural properties.

Pembrokeshire College is helping Ifan and fellow Welsh speaking learners to continue their learning in their first language. A Welsh speaking member of staff assists in reviews and provides opportunities for learners to speak Welsh.

“Ifan continues to be a fantastic Welsh language ambassador for the college and grabs every opportunity which is reflected in the Coleg Cymraeg Cenedlaethol award that he won,” said Janice. “His confidence has grown since he became a Welsh Language Ambassador.”

“With the Welsh Government’s target to reach one million Welsh speakers by 2050, it has never been more important to develop your bilingual skills and increase your employability prospects.”

To find out more about apprenticeship opportunities go to Careers Wales careerswales.gov.wales/apprenticeships
or telephone 0800 028 4844.