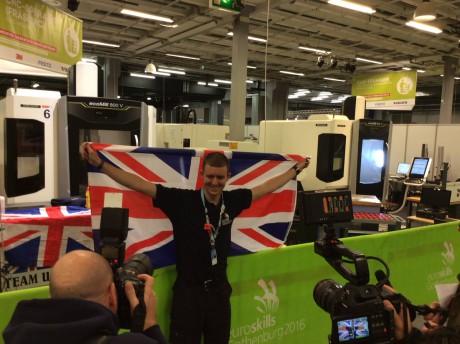 The new chair of the organisation that represents more than 100 work-based learning providers in Wales has praised the success of Welsh learners who won 45 medals at the WorldSkills UK finals.

Sarah John, who leads the National Training Federation for Wales, said it was important to celebrate success and she called on members to participate in Apprenticeship Week, VQ Day, the Apprenticeship Awards Cymru and Welsh, regional and UK Skills competitions to showcase Wales and the nation’s skills.

She said Wales had 86 finalists in the WorldSkills UK finals at the Skills Show held at the NEC, Birmingham and 37 of them were apprentices. She congratulated Wales on winning the most medals and Coleg Sir Gâr and Coleg Cambria for finishing equal third behind two Scottish colleges in the medals table.

“This was a great achievement and demonstrated the high standards and commitment shown by the tutors, learners and employers,” she said.

Welsh competitors Nathan Jones from NPTC Group and Ethan Davies from Electroimpact and Coleg Cambria went on to represent the UK at Euroskills Gothenburg in web design and CNC Milling respectively from December 1-3. Five hundred young skilled workers from 28 countries competed over three days in 35 skills for the title best of Europe. Ethan achieved a medallion of excellence.

Both competitors continue their journey as part of Squad UK, participating in a training and development programme which will include the selection of Team UK ahead of WorldSkills Abu Dhabi 2017.

Mrs John also congratulated Cardiff and Vale College for winning the Pearson Award for the promotion and delivery of successful apprenticeships at the annual Beacon Awards.

“We need to increase our participation in events and skills competitions to showcase Wales and I urge all learning providers to get involved,” she said, “It really is inspiring not just for your delivery teams but also for the learners and employers.”

Wales’ Minister for Skills and Science Julie James said she was proud to attend the Skills Show to support the competitors from Wales who excelled in the competitions.

She commended the ‘Team Wales’ approach with the Welsh Government, learners, learning providers and employers all pulling together in the same direction.

She said the success of Wales’ talented young people in the WorldSkills UK finals was a testament to work of the nation’s work-based learning providers and colleges.