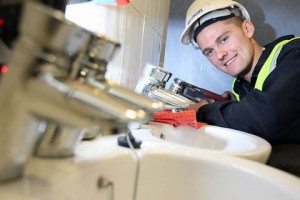 A young engineering apprentice from South East Wales described by his employer as “inspirational” has been shortlisted for a prestigious national award.

Rhys West, 20, from Penpedairheol, who works as a gas engineer with Brecongate Projects in Pontypridd. is one of 19 finalists in six categories of the Apprenticeship Awards Cymru, organised by the Welsh Government in partnership with the National Training Federation Wales (NTfW).

The awards are designed to recognise the outstanding achievements of learners, employers and providers involved in the delivery of quality apprenticeships across Wales. Welsh Government apprenticeship programmes are part funded by the European Social Fund.

The winners will be announced at a high profile presentation ceremony at the Mercure Cardiff Holland House Hotel, Cardiff, on Wednesday, November 16. The main sponsor of the awards, which aim to showcase excellence in skills development in Wales, is Pearson and the media partner for the event is Media Wales.

During a four-year apprenticeship, Rhys worked on a range of different contracts with Brecongate Projects, from domestic gas servicing to emergency call-outs. He now works on commercial and industrial maintenance contracts with a local authority.

“I have found it invaluable working alongside time-served specialists in the trade,” said Rhys. “I want to move forward within the company, providing professional services and also provide future apprentices with the skills and opportunities I have been so lucky to have.”

Rhys, who is shortlisted in the Apprentice of the Year award category, has also introduced a number of new ideas to improve the business, including job sheets that can be sent to mobile phones, making logging jobs easier and quicker.

He studied at The College Ystrad Mynach, gaining an NVQ Level 3 in Mechanical Engineering (Plumbing) and has also taken extra qualifications to boost his skills at evening classes.

Now studying an Apprenticeship in Mechanical Engineering Services – Plumbing, he will eventually become a fully-qualified electrical engineer and mechanical engineer.

Spurred on by his son’s success, Rhys’s father Paul, who was a welder/fabricator, has also now retrained as a Mechanical Engineer. He has been taken on by Brecongate, often working with Rhys.

Ryan Powell, commercial director for Brecongate, said: “Rhys is a highly motivated individual and is not only a credit to our organisation but also to the industry as well as being a great inspiration to the younger generation. I expect him to go much further with his career and look forward to seeing what he achieves in the future.”

Around 250 stakeholders from the vocational education and training sector across Wales are expected to attend the high profile awards ceremony, where guests will dine out with chefs from the Welsh National Culinary Team.