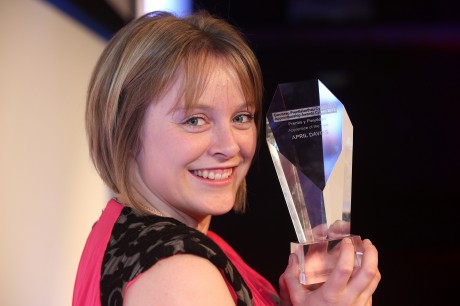 April Davies - Apprentice of the Year 2013

Learners, employers and training providers across Wales are being encouraged to get their applications in for this year’s Apprenticeship Awards Cymru before the June 27 deadline.

The prestigious awards, organised jointly by the Welsh Government and the National Training Federation for Wales (NTfW), culminate with a high profile presentation ceremony and dinner at the Celtic Manor Resort, Newport on Friday, October 31.

The Apprenticeship Awards Cymru celebrate the achievements of those who have exceeded expectations, shown a dynamic approach to training and demonstrated initiative and enterprise, innovation, creativity and commitment to the improvement of skills development for the Welsh economy.

They recognise employers who commit to developing their workforce through apprenticeships and other work-based learning programmes, which support employees during their training. They are also a great way to evaluate training and development, as well as a fantastic motivational factor for any workforce or learner.

The Apprenticeship Programme in Wales is funded by the Welsh Government with European Social Fund support.

In addition to an Apprenticeship Provider of the Year award, there is also a Provider Award for Social Responsiveness.

Entry is free and application forms are available from the Welsh Government and NTfW’s websites at: http://wales.gov.uk/topics/educationandskills/skillsandtraining/apprenticeships/apprenticeship-awards-cymru/?lang=en and https://www.ntfw.org/apprenticeships-awards.

Deputy Minister for Skills and Technology Ken Skates appealed to learners, employers and training providers to apply for awards to showcase their achievements.

“Amongst them will be some truly exceptional apprentices and the Apprenticeship Awards Cymru are a chance for us to celebrate their hard work and their achievements.

“Equally important of course are the training providers and employers who have gone the extra mile to support their apprentices. This is exactly why the Welsh Government has invested so heavily in its Apprenticeship Programme and it’s clear that we are seeing a fantastic return on this investment”

“I would encourage as many learners, employers and training providers as possible to enter the awards and tell us about their success.”

Latest figures from the Welsh Government reveal that success rates for apprenticeships in Wales also remain well above 80%.

Apprenticeships have also been a beneficiary of EU-backed Jobs Growth Wales, with 82 per cent of young people in the private sector progressing to sustained employment, an apprenticeship or further learning after completing their six month opportunity.