Learner award finalist Louis is looking ahead to an Army career 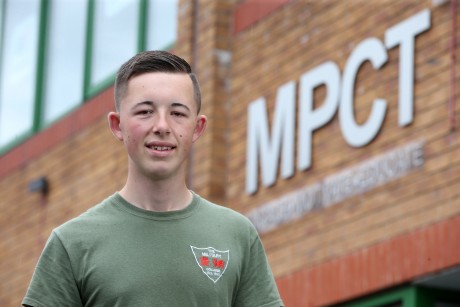 Louis Bowen has a lot to thank the Military Preparation College for. The 17-year-old from St Athan, who always wanted to join the Army, attended the Bridgend-based college – part of MPCT (Motivational Preparation College Training) – after years of being bullied at school for being overweight, leaving him depressed and under achieving.

But in the space of a year, Louis’ life has been transformed and he is now at Harrogate Army Foundation College doing his basic soldier training before he moves on to a trade with the Royal Logistics.

His learning journey has put him in contention to win a major award at the Apprenticeship Awards Cymru 2015. He is one of three finalists shortlisted in the Traineeship Level One Learner of the Year category at the high profile awards ceremony to be held at the Celtic Manor Resort, Newport on Thursday, October 29.

At college Louis achieved BTEC Certificate Level 1 success in Public Services, Application and Communication. But more than that he grew in confidence, delivering a five-minute testimonial speech to 300 guests, working as part of a team to raise money for the local community and developing skills to complete his Army application form.

This also gave him the motivation to develop his fitness, losing three stones in weight. His first 1.5mile training run took 15 minutes and 20 seconds. He is now five minutes quicker.

Military Preparation College lead instructor Steve Tallis said: “Louis is a prime example of how hard work and dedication can pay off. Since joining the Army he has returned on every leave to give advice to students.”

Louis said: “I was part of a great college that provided all the tools I needed to reach my goals. Bullying had dented my confidence but also gave me more strength to succeed. The college felt like a family.”

Deputy Minister for Skills and Technology Julie James congratulated Louis and the other 36 award finalists. “We have some truly exceptional apprentices and learners here in Wales and the Apprenticeship Awards Cymru provide a perfect platform for us to celebrate their hard work and achievements,” she said.