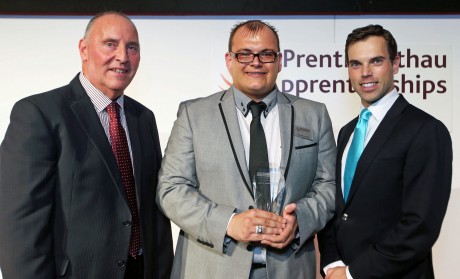 A hotel based in the Blackwood mountains has won a prestigious national award after it successfully implemented an Apprenticeship Programme to develop and improve employment opportunities at the business.

Maes Manor Hotel, Blackwood was named Small Employer of the Year at the Apprenticeship Awards Cymru 2013, organised jointly by the Welsh Government and the National Training Federation for Wales (NTfW). The high profile ceremony, attended by more than 400 people, was held at the Celtic Manor Resort, Newport.

Operations director Lee Parsons said: “The hotel has had a rough time over the last couple of years and this fantastic award is going to be good for the business and great for the staff morale.”

Maes Manor Hotel introduced an apprenticeship programme two years ago to increase moral and productivity. With the emphasis on improving employment opportunities, practices and procedures, along with customer service, the hotel now employs 10 apprentices.

“We decided that by encouraging and committing staff members to undertake an apprenticeship, supported by a quality training programme, would help to create a more focused team,” said Mr Parsons.