Mahima launches her career with an apprenticeship at Welsh Parliament 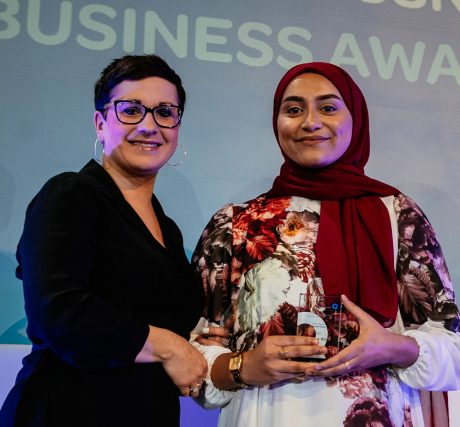 An award-winning young Muslim woman is reaping the benefits of opting for an apprenticeship in Wales rather than a university degree to launch her career.

Mahima Khan, 20, from Cardiff, has completed a foundation apprenticeship (Level 2) in business administration and has now progressed to a Level 3 diploma whilst working at Senedd Cymru, the Welsh Parliament.

The learning programme is being delivered for Cardiff and Vale College (CAVC) by JGR Group as part of the Quality Skills Alliance consortium.

Gaining valuable experience whilst working in the research service, education and human resources departments at the Senedd, Mahima has secured a permanent role as support officer to the Climate Change, Environment and Rural Affairs Committee.

She has contributed to the development of the Senedd’s recruitment and intake strategies, co-chairs the workplace equality network and is passionate about representing the black and minority ethnic (BAME) community.

She also played a role in setting up the Welsh Youth Parliament, helping in the process to select the 60 members from the initial 450 candidates. In addition, she was chosen to join heads of service in a focus group appointed to recruit a new director of Senedd communications.

“This made me feel empowered and motivated as I am constantly surrounded by staff members in roles that I, one day, will maybe sit in,” said Mahima. “My placements in different departments also gave me further confidence to apply for a permanent position.”

During her apprenticeship, she has learned how to create a publication and research briefing, manage and maintain library information resources, expand a digital collection by creating new catalogue records and write and edit bilingual information for Members of the Senedd.

Recalling the day when she began her apprenticeship at the Welsh Parliament, Mahima confessed to having been apprehensive.

“I was worried I wouldn’t fit in and I was afraid that I would be looked down upon because I am a young Muslim woman who wears a hijab,” she explained. “I need not have worried because every single person at the Senedd has been very supportive and amazing.

“Since the first day, I have felt so welcomed and will hopefully stay on to be able to set an example for younger Muslim women. I am here to represent the majority, not the minority, and I am so glad I have settled in a workplace where I have not experienced any discrimination or prejudice.

“My first year as an apprentice taught me to learn more about my surroundings which led me to do more to help others that may have been through similar experiences. Everyone’s story is different. I hope mine becomes a story I can share with more people because I believe that I have the potential to make a difference.

“I am proud to be in a position in which I can advocate for the BAME community. I am also a massive advocate for apprenticeships because they are 100 per cent life-changing.

“I was one of only two of my school friends who chose to do an apprenticeship instead of going to university. My university friends always talk about how they now regret their decision because we have permanent jobs before they have graduated and they will have a student loan to repay.”

She is keen to encourage more people from the BAME community to confidently follow in her footsteps to increase diversity at the Senedd.

“My ambition is to stay at the Senedd, to keep working hard, keep being recognised and hopefully progress to a senior level where I can provide more input to the recruitment team to try to ensure that people of all backgrounds apply for jobs here,” added Mahima.

“My strong faith and connection to religion has played a big part of building my confidence whilst working at the Senedd. Islam teaches so many things including if you believe in yourself, anything can happen.”

She thanked her mother for encouraging her to apply for the apprenticeship and her training manager at JGR Group, Lydia Harris, for her support, adding: “I will be forever thankful to have such incredible people part of my journey.”

Humie Webbe, the National Training Federation for Wales’ strategic equality and diversity lead, said: ‘Mahima is a fantastic ambassador for apprenticeships and her passion for learning shines throughout her story.

“It’s great to hear how Mahima wants to use her experience to support young women who struggle with self-confidence and we hope her story will inspire others from BAME backgrounds to consider apprenticeships.”

Cardiff and Vale College principal Kay Martin said: “As a college we believe it is vital to represent all of the communities we serve and we are extremely proud of Mahima for demonstrating so clearly that apprenticeships are a valuable career route for everyone, regardless of their background.

“Mahima is a role model for apprentices everywhere, especially for those from BAME backgrounds. She will go far and I am sure her experiences and dedication will encourage others to do the same.”

Businesses can discover how they can benefit from taking on an apprentice or upskilling their current workforce by registering their interest at businesswales.gov.wales/skillsgateway/apprenticeships or by calling 03301 228 338 for more information.
Individuals who are finding their way in the world of work or taking steps towards a career change can find out more at https://gov.wales/apprenticeships-genius-decision.