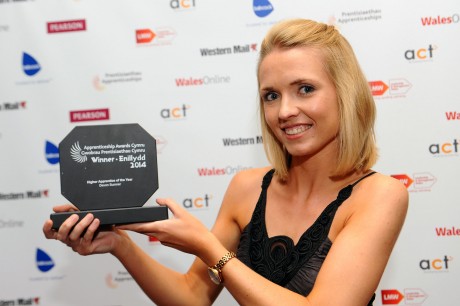 Devon Sumner with the Higher Apprentice of the Year award.

A talented young engineer will remember Halloween 2014 for the rest of her life. On the day Devon Sumner completed her apprenticeship with a leading Welsh aircraft manufacturer Airbus UK she also won the prestigious Higher Apprentice of the Year award for Wales.

Devon, 23, who works for the Broughton-based company, received the accolade at the high profile Apprenticeship Awards Cymru 2014 ceremony, held at the Celtic Manor Resort, Newport. Workmate Daniella Hughes was also a finalist for the award, which was last year won by Alex Birbeck from Airbus UK.

“I am overwhelmed,” was her immediate reaction after receiving the award. “This proves that I made the right decision to leave university and pursue an apprenticeship. I officially finished my apprenticeship today and this award is a great acknowledgement of my work over the past three years.

“To win the award and know that I start a wonderful new role as a project leader on Monday is unbelievable. Tonight’s awards ceremony reinforces how important apprenticeships are to individuals and to companies.

“I believe myself to be a great ambassador both for apprentices and women in engineering.”

The awards are organised jointly by the Welsh Government and the National Training Federation for Wales (NTfW). Showcasing excellence in skills development in Wales by learners, employers and learning providers, the awards are sponsored by Pearson PLC with support from media partner, Media Wales.

Devon, from Saighton, near Chester, already has a CV to be proud of. She has met the Queen at Buckingham Palace, taken Prime Minister David Cameron on a tour of her Airbus UK work place and appeared on TV.

Working as a Higher Apprentice with Airbus, Coleg Cambria and Glyndwr University, she has a string of qualifications that include a distinction in her Foundation Degree in Aeronautical Engineering and an NVQ Level 4 in Engineering Leadership.

This year she should achieve a first class Bachelor’s Degree with Honours in Aeronautical Engineering and achieve incorporated engineering status with the RAeS. She has also won the foundation degree Ede & Ravenscroft Prize at Glyndwr University and the national EEF Outstanding Achievement Award.

Deputy Minister for Skills and Technology, Julie James, said: “Higher Apprenticeships have just as much to offer as a place at a top university and it’s clear that more and more learners in Wales are opting for this route. Between 2012-2013, 2,275 Higher Apprenticeship places were created in Wales compared to just 280 in 2011/12.

“Thanks to her Higher Apprenticeships, Devon is now rapidly progressing in her chosen field. She is a fantastic role model for young people who are considering similar careers and I’m delighted that she has been recognised.”