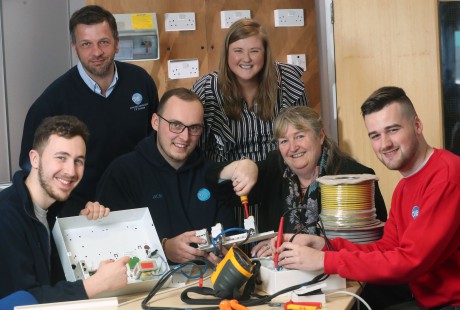 Minister for Skills and Science Julie James tries her hand at being an electrician during her visit to Crimewatch Alarms Ltd and C W Electrical watched by directors Andrew Hutchins and Rachel Meese-Kendall and apprentices (from left) Ewan Maggs, Jacob Slater, Lewis Rowlands.

Wales’ Minister for Skills and Science, Julie James, today (March 27) launches the hunt for this year’s star learners, employers, tutors and assessors with a visit to one of last year’s Apprenticeship Awards Cymru winners.

The Minister selected Crimewatch Alarms Ltd and CW Electrical, a Newport-based electrical contractor and security and fire alarms specialist, as a shining example of what can be achieved by a business that invests in apprenticeships to develop a highly skilled workforce.

She’s hoping that many similar companies across Wales will apply for this year’s coveted awards, which are launched by the Welsh Government in partnership with the National Training Federation for Wales (NTfW). The awards are sponsored by Pearson PLC and supported by media partner, Media Wales.

Application forms are available to download from the NTfW’s website at https://www.ntfw.org/apprenticeships-awards/ and the closing date is noon on June 23, 2017.

Finalists in 11 categories will be shortlisted for awards, which will be presented at a high-profile ceremony to be held at the Celtic Manor Resort, Newport on October 20, 2017.

Crimewatch Alarms Ltd and CW Electrical is a family run business that has made training and development its top priority since it was formed by managing director, Harry Meese, 31 years ago.

Being named Small Employer of the Year in 2016 was the company’s first major award since the SME Award 2007 from Constructing Excellence Wales and has been a springboard for significant business growth.

“Entering last year’s Apprenticeship Awards Cymru was one of the best things we have ever done,” said director Rachel Meese-Kendall. “It has taken the company to another level and created lots of opportunities for us. I was advised by one of the judges, a former award winner, to take every opportunity that was given to us and that’s what I’ve done.

“Winning the award has thrown us into the limelight and improved our business turnover. Due to extra work, we have recruited three more staff and are taking on three new apprentices from a local school in September.”

The company now employs 39 staff, with another new job in the pipeline. There are five apprentices currently on the books and another two trainees are soon to progress to apprenticeships.

The company mainly works for large residential landlords and development companies across South Wales, but it is now expanding into England.

Rachel explained that the company had planned for business growth, due to an upsurge in the building industry, by ensuring that its workforce is multi-skilled. Former apprentices who have grown with the business make up around 70 per cent of their operative team.

The company works with training provider Coleg QS to provide the best training possible for not only its own workforce but also apprentices employed by other contractors and clients.

Delighted that the company was continuing to reap the rewards of investing in apprenticeships, Skills and Science Minister, Julie James said: “Developing skilled people is vital for our economy and Crimewatch Alarms Ltd and CW Electrical is a shining example of the business success that can be achieved by investing in and developing the workforce.”

The Minister added: “More employers across Wales are recognising the value of our successful apprenticeship programme and the need to raise higher level skills in order to address skills gaps and respond to industry changes.

“The Apprenticeship Awards Cymru provide a perfect platform for us to celebrate the achievements of the programme through our star apprentices, employers and learning providers whose stories never cease to amaze and inspire.”

The awards recognise learners, employers and training providers across Wales, who have excelled on the Welsh Government’s Traineeship and Apprenticeship Programmes.

In the employability category, there are awards for Traineeship Learner of the Year for Engagement and Level 1. There are also awards for the best foundation apprentice, apprentice and higher apprentice of the year.