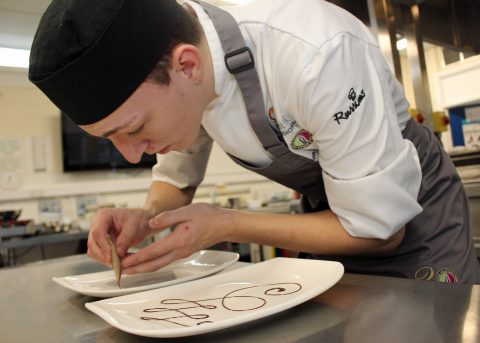 2018 is becoming a year to remember for a 19-year-old award-winning student chef, who recently returned from a work placement in a Michelin-starred restaurant, and is currently supporting the Wales team at the Culinary World Cup in Luxembourg!

He now has another reason to celebrate after qualifying for the national final of Skills Competition Wales.

Dalton Weir from Mochdre recently won the North Wales heat of the Skills Competition Wales – Hospitality competition at Coleg Ceredigion. He is studying on the City and Guilds Level 3 Diploma In Advanced Professional Cookery at Coleg Llandrillo’s Rhos-on-Sea campus.

There were two Welsh heats for budding chefs to get the chance to qualify for the national final: at Coleg Ceredigion and Coleg y Cymoedd. The top four from each heat qualified for the final, which will be held at Cardiff and Vale College in January 2019.

Dalton, along with his fellow competitors, had to cook and serve a three-course meal in three hours. He created a starter of lemon sole, followed by a main of pheasant, culminating with a dessert of chocolate ganache.

The Ex-Ysgol John Bright pupil recently completed a work placement with Michelin star chef Simon Hulstone at The Elephant Restaurant in Torquay, and was also awarded a Welsh Livery Guild bursary of £1,000 to cover his expenses. He is also currently supporting Culinary Team Wales at a major international catering competition: the Culinary World Cup in Luxembourg.

Dalton said: I had a few teething problems at first, but soon got into the swing of things. It was quite an intensive day of competition and I was delighted to win it and qualify for the national final which takes place after Christmas.

One of Dalton’s tutors, Brian Hansen, said: We are thrilled with his success. Recognition at competitions on a regional, national and international stage is great for our students’ CVs. There extra-curricula activities are part of the ethos of the college. We at college all agree that he has a very bright future ahead of him.

Dalton has been interested in cookery from a young age after taking the subject at school. His list of competitive achievements since enrolling at college is impressive: he won Gold in the ‘Street Food’ category at this year’s Welsh International Culinary Championships; qualified for the final of the UK Young Seafood Chef of the Year competition; represented Wales at the Future Talents competition in Holland and was among the Welsh team that took part in the acclaimed Toque D’or competition at The Dorchester Hotel in London.

Skills Competition Wales – Skills Competition Wales is a Welsh Government-backed series of events designed to celebrate vocational skills and create a highly skilled Welsh workforce for the future. It aims to raise the profile of skills in Wales and offers students, trainees and apprentices in Wales a chance to challenge, benchmark and raise their skills by taking part in competitions across a range of sectors.

The college was recently awarded an ‘excellent’ by Estyn for its Hospitality and Catering provision.