Nantgarw’s Capita reaches the finals of the VQ Awards 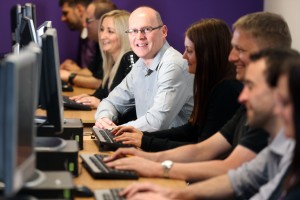 Nantgarw based business services outsourcing company Capita has reached the finals of the Vocational Qualifications Awards 2013.

The company’s commitment to the development of staff vocational qualifications has clinched a place in the EU-backed VQ Employer of the Year final, which takes place on June 5 – VQ Day – at a ceremony to be held at Coleg Morgannwg, Nantgarw.

Capita will be up against Flintshire County Council and Betsi Cadwaladr University Health Board.

“We’re really pleased to reach the finals of the awards, which demonstrate how we treat the development and training of our staff very seriously with vocational qualifications,” said Jason Smith, Capita’s operations manager.

The company has worked with award winning training provider Cambrian Training Company to ensure its Vational Qualifications (VQs) meet the needs and demands of the business.

“Employees are more proficient in their roles and it has led to the progression and promotion of staff within the business as well as benefiting our clients. VQs have given our staff confidence and motivated them in all aspects of their careers,” added Mr Smith.

VQ Day is designed to celebrate vocational skills and the success they bring, raise standards throughout Wales and identify and publicise exemplars. In addition, the awards highlight that vocational skills improve the performance of individuals and organisations and equip Wales with a world class workforce.

Vocational qualifications have never been more important to the economy and the individual, as they deliver the trained, talented employees businesses are crying out for and ensure young people have the skills needed to succeed in education and work.

Wales’ Deputy Minister for Skills and Technology, Jeff Cuthbert said: “It’s important that vocational qualifications become, and remain, first choice options for our brightest and best learners and that their worth is fully recognised. VQ Day plays a key role in securing that objective.