Enterprising employers and inspirational learners spoke about their pathways to success at a well attended event to celebrate National Apprenticeship Week in Wales.

Two hundred employers and training providers came together at The Vale Hotel and Spa, Hensol for the successful event themed ‘It’s Time to Talk Apprenticeships’, which was organised by the Welsh Government in partnership with the National Training Federation Wales (NTfW) and Pearson Work Based Learning.

The annual event is designed to raise awareness of the positive impact that apprenticeships make to individuals, businesses and the wider economy. 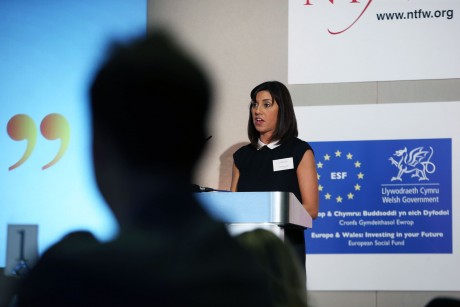 Carmela Carrubba of Real SFX, Cardiff speaking at the event.

Mrs Carrubba told the audience that she and her husband, Danny Hargreaves, moved from London to Cardiff to set up their special effects business in 2011 after identifying a gap in the market.

The company now works on productions including Doctor Who, Sherlock and Casualty and has won a string of awards including a Welsh Bafta and an apprentice of the year in the creative sector.

Real SFX has worked with training provider Cyfle to develop a specific apprenticeship programme in creative and digital media, which is embedded into the Real SFX business plan.

She thanked the Welsh Government for supporting the training and development of good quality apprentices who were helping to grow the business. She said Wales was now the hub of the media industry.

“Every one of my apprentices is different but they all have one thing in common: passion, drive and a willingness to learn,” she added.

Dewi Foulkes has used a 12-month apprenticeship to qualify as an assistant technician with the company and now helps to provide special effects, including explosions for filming. “The apprenticeship was an important first step to get me on the pathway to success,” he said. “There is a wealth of talent in Wales that we should all be proud of.”

Mr Rees, regional manager for Cyfle Building Skills, an award-winning shared apprenticeship scheme for the construction industry in South West Wales, described how the successful scheme had developed from 23 apprentices in 2006 to 140 today to meet the needs of the industry. It was now the largest apprenticeship scheme of its type in the UK.

He stressed the importance of investing in young people as the future workforce, highlighting the job opportunities that would be created by multi-billion pound government investment in the UK infrastructure in the next five years.

He introduced two of the scheme’s former apprentices, Owain Phillips and Gareth Evans, who both described their apprenticeships as life changing experiences. Mr Phillips, a carpenter, is now a trainee site manager for Morganstone, is taking a HNC degree and has worked on an overseas project in Uganda. 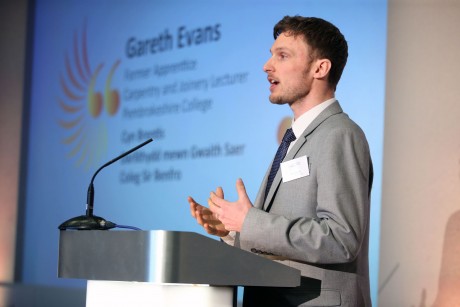 Mr Evans, a carpentry and joinery lecturer ay Pembrokeshire College, is a former UK carpentry champion who has represented the UK in the WorldSkills competition. Having won four gold medals in site carpentry in regional and national competitions, he has been appointed compatriot support expert for Team UK in WorldSkills Sao Paulo 2015.

He said Welsh apprentices were now able to work to world class standards and had potential to become gold medallists.

Other speakers at the event, hosted by BBC presenter Jamie Owen, were Deputy Minister for Skills and Technology Julie James, NTfW regional vice chair Paul Napier and Institute of Directors’ regional director Robert Lloyd Griffiths, who both supported the call for a partnership on apprenticeships to build the Welsh economy.

Mr Griffiths pledged on behalf of the IoD to play its part in spreading the message about the need for partnership with the business community to engage with and deliver apprenticeships.

The event was also used as a launchpad for this year’s Apprenticeship Awards Cymru, which are designed to recognise and reward best practice in the use of apprenticeships for learners, employers and providers. The awards ceremony will be on October 29 at the Celtic Manor Resort, Newport.