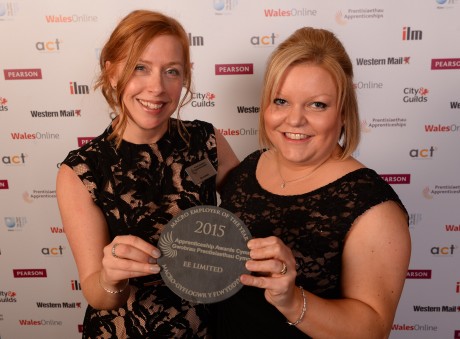 One of the largest digital communications companies in the UK, which has a base in Merthyr Tydfil, celebrated a major honour at the Apprenticeship Awards Cymru 2015.

EE was named Macro Employer of the Year at the high profile awards ceremony attended by 450 guests at the Celtic Manor Resort, Newport on Thursday.

Operations manager Claire Litten-Price said: “It’s an absolutely amazing award and well deserved for all the hard work the company has done with apprentices in Merthyr Tydfil.

“We try to make our apprentices understand that they all have an important role to play and can make such a big difference to the company.”

EE, which serves more than 30 million customers, is at the forefront of innovation and employs more than 750 frontline and support staff at its Merthyr Tydfil centre. Apprenticeships form a significant part of its learning and development programme, underpinning its values of “Bold, Clear and Brilliant.”

The company established its Apprenticeship programme three years ago and one of the main reasons was to reduce the number of people leaving the organisation in their first year. The company currently employs 251 apprentices.

“We had 57 per cent of our frontline employees leaving in the first year which resulted in a significant training and recruitment cost,” said Nicola Watkins, team lead for apprentices at EE’s Customer Services at Merthyr Tydfil.

That figure has dropped to 30 per cent since the introduction of the Apprenticeship programme, working in partnership with learning provider, The College, Merthyr Tydfil.

The College and EE formed a partnership specifically to develop a programme to both support business retention and recruit young people from the local area.

“Apprentice teams continue to be the preferred intake instead of past experience. Engagement levels have increased and sickness levels have also reduced, which is worth £300,000 annually,” added Nicola.

EE in the UK plans to have provided 1,300 Apprenticeships by the end of the year. One of these, Lloyd Price, 20, from Merthyr Tydfil, was runner up for the Foundation Apprentice of the Year award.