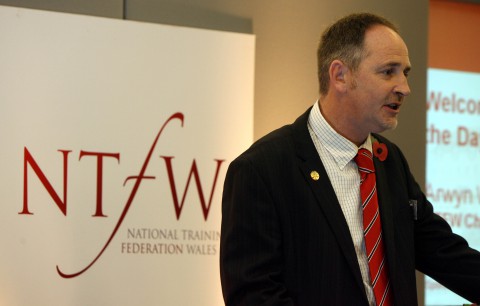 The new chairman wants the National Training Federation Wales to become the leading voice in delivering work-related skills in the Principality.

Arwyn Watkins, 46, managing director of award winning training provider Cambrian Training Company, based in Welshpool, takes over the chair from Terry Jones, who has recently retired from North Wales Training.

Having been vice chairman to Mr Jones for four years, Mr Watkins is looking forward to the challenge of leading the NTFW as it prepares for a major conference, Skills Working for Wales, at the Copthorne Hotel, Cardiff on November 6.

“It’s a great honour to take on the role of chairman and I wish to pay tribute to the contribution made to the federation by Terry Jones and my fellow board members,” he said. “My main aim is to establish the strategic direction of the federation to ensure that we are fit for purpose to deliver the Welsh Assembly Government’s Skills that Work for Wales Strategy and Action Plan.

“I want to get the learning network working together more collaboratively and to firmly establish the federation as the leading voice for the delivery of skills for and in the workplace.

“As our network of providers is engaged with about 30,000 businesses in Wales daily, we are well placed to understand the changing needs of employers.

“It has taken the federation a long time to get where it is today and there is still a lot of work to be done to deliver on the priorities in the Welsh Assembly Government’s Skills that Work for Wales Strategy and Action Plan.”

The federation has a network of 80 members nationwide involved in the delivery of post 16 learning. They comprise private sector training providers, local authorities, further education institutions, charities and the voluntary sector.

Mr Watkins is a member of the Welsh Assembly Government’s Agri Food Partnership, the Triple A National Committee and the World Skills Wales Project Steering Group.

Originally from Llanwrtyd Wells, he now lives in Llanfair Caereinion and is married with two children. He attended Builth Wells High School before joining the Army as an apprentice chef. He spent 14 years with the Army Catering Corps attached to a variety of regiments and went on to teach at the Army School of Catering.

In 1991, he returned to civvi street to take up the post of executive chef for the Stenna Line ferry company and was involved in the project development team leading to the launch of the Stena HSS.

He went on to open his own restaurant in Kent where he also lectured at Thanet College and later became head of catering at South Kent College, a post he held until October, 1998 when he returned to Mid Wales to join Cambrian Training Company.

In 2001, he led a management buy out of the company, which has since won a string of awards including the Welsh Assembly Government’s Modern Apprenticeship Award for learning providers in 2007.

Passionate about quality Welsh food and cooking, he established the award-winning Centre of Excellence for Butchery and Culinary Skills in Welshpool in 2002. He also coached the Junior Welsh National Culinary Team to a gold medal at the Culinary Olympics in 2004 and is a former director of the Welsh Culinary Association.

—   Training Federation Conference Held in A Climate Of Change »