North Wales aerospace company flies away with a national award 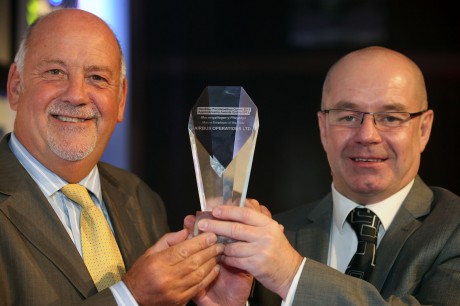 One of the world’s largest aircraft manufacturers, which has its wing manufacturing plant in North Wales, has landed a prestigious national award.

Airbus, based at Broughton, Flintshire, was named Macro Employer of the Year at the Apprenticeship Awards Cymru 2013, organised jointly by the Welsh Government and the National Training Federation for Wales (NTfW). The high profile awards ceremony was held at the Celtic Manor Resort, Newport.

One of the company’s employees, Alex Birbeck, 21, was also named Higher Apprentice of the Year. 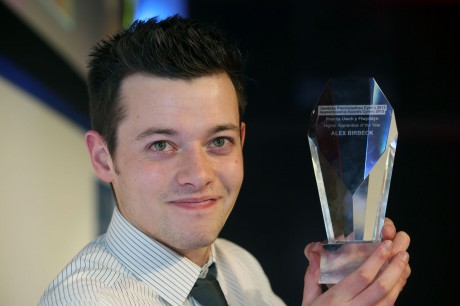 Alex Birbeck with his Higher Apprentice of the Year award.

Mark Preston, Apprenticeship Programme operations manager at Airbus, said: “This is recognition for all the hard work put in by everybody involved within the organisation, from the apprentices and mentors to the management and our training provider Coleg Cambria.”

Gary Griffiths, head of early careers programmes at Airbus, added: “This award recognises that what we are doing is pretty special and we very proud of our achievements.”

The Apprenticeship Programme at Airbus is at the cornerstone of its skills strategy, with excellent talent retention and development, ensuring one of the world’s leading manufacturers of aircraft has a highly skilled workforce.

Currently employing 350 apprentices in a range of roles, the company has been a leading organisation in Europe for supporting apprenticeships for many years and continues to lead within the sector.

“We bring and develop young people into our business, some of which come from school or college and offer development to allow those who want it the opportunity to grow into leadership roles.”