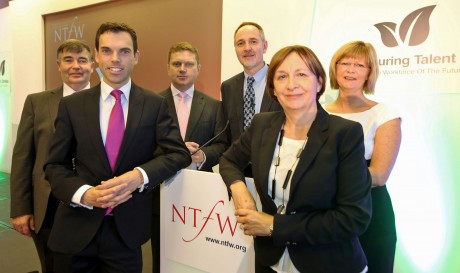 Deputy Minister for Skills and Technology, Ken Skates, has called on work-based learning providers in Wales to play a key role in setting out a clear pathway to employment, opportunity and success for every young person in Wales.

In a keynote speech to 160 delegates at the National Training Federation for Wales’ annual conference at the Celtic Manor Resort, he outlined the steps needed to give all young people in Wales the support, guidance and opportunities to succeed.

The conference theme, ‘Nurturing Talent: Building the Workforce of the Future in Wales’, explored how work-based learning providers could work together with key stakeholders to ensure the needs of the economy and of Welsh employers, particularly small and medium sized enterprises, were met.

“In the days before devolution we set an inspiring target of seeing 50 per cent of young people progress to higher education,” said the Deputy Minister, making his first major speech in post. “What we didn’t do, but what I as a Minister will do, is talk about what happens to the other 50 per cent.”

He explained that alignment, employability and engagement were all key to helping young people onto the right path. “We undoubtedly need to align the courses and programmes on offer from schools, colleges, universities and other training providers with the skills needs of employers.

“I want to make sure that the courses and skills on offer deliver jobs and growth, supporting businesses and developing people in employment or seeking work. To ensure that this is happening and continues to happen in the future I will be publishing a policy statement on skills in the near future.”

On employability, the Deputy Minister stressed the need to equip young people with the experience, skills and attitudes required to obtain and sustain work.

Finishing on the issue of engagement, the Deputy Minister called for a move towards new understanding and expectation on how responsibility for skills is shared between individuals, schools, employers and Government.

The future funding of work-based learning programmes was also a key theme for the NTfW’s chief executive, Arwyn Watkins. He said members must be prepared to seek funding from sources other than the Welsh Government and Europe in the future and work together to come up with employment and skills solutions.

He warned them against “sleep walking into the future” by believing that the current level of Welsh Government funding would continue. Evidence suggested that there would be far less public funds available, with the 2014-15 budget for Further Education Institutions set to be cut by between £15-£20 million.

“For this network to deliver on the aspirations in work-based learning we will need to secure alternative cash from either the employer, the learner or from a corporate sponsor who sees it as their social responsibility to reinvest a percentage of their profits into the skills aspirations of this country’s youth,” said Mr Watkins.

He appealed to NTfW members, the Welsh Government and Estyn to ensure that public money is spent wisely by removing bureaucracy, stamping out duplication and targeting funding more precisely on skills delivery.

He also called on the Welsh Government to involve the NTfW and recognise work-based learning providers in the new Education (Wales) Bill, which has big implications for the future of the education and training workforce in Wales. By snubbing work-based learning providers, the Welsh Government was wasting a golden opportunity to achieve parity of esteem between academic and vocational learning routes, he said.

Parity of esteem was also a key topic covered by Edge Foundation’s chief executive Jan Hodges as she supported a closer working relationship with the NTfW to celebrate vocational learning.

In a challenging speech, the FSB Wales’ head of external affairs Iestyn Davies called on NTfW members to take the lead in engaging with the nation’s SMEs to provide them with a skilled workforce for the future to transform the Welsh economy.

He said there was a perception amongst FSB members that apprenticeships were for large companies, but not for them. Pathways to further education and work-based learning needed to be marketed with the same vigour as higher education.

He warned delegates that things would have to be done differently to deliver the skills that the Welsh economy needed now and in the future, advocating shared apprenticeships to ensure that learners gained skills that were relevant to businesses of all sizes.

The other speakers were Jan Parfitt from Skills for Health, and Joe Banks, the Welsh Government’s head of youth support and guidance.

The conference preceded the Apprenticeship Awards Cymru presentation dinner. Both the conference and the awards are sponsored by Pearson PLC and media partner is Media Wales.