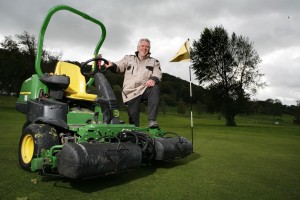 Chris Readman at work on the golf course.

A 65-year-old man from Corwen in North Wales has been shortlisted for a prestigious national award that recognises the outstanding achievements of learners, employers and providers involved in the delivery of quality apprenticeships across Wales.

Chris Readman, who works at The Bala Lake Hotel and Activity Centre, part of the John Lewis Partnership, is one of 19 finalists in six categories of the Apprenticeship Awards Cymru, organised by the Welsh Government in partnership with the National Training Federation Wales (NTfW). Welsh Government apprenticeship programmes are part funded by the European Social Fund.

The winners will be announced at a high profile presentation ceremony at the Mercure Cardiff Holland House Hotel, Cardiff, on Wednesday, November 16. The main sponsor of the awards, which aim to showcase excellence in skills development in Wales, is Pearson and the media partner for the event is Media Wales.

Chris, who joined the hotel in 2008, taking on responsibility for the golf course and grounds, has now completed a Foundation Apprenticeship in Horticulture with Deeside College. Training for the National Proficiency Tests Council Level 2 qualification all took place at work.

“At the age of 65, I like to think I have set an example to people of all ages that there are no barriers to changing career direction or achieving qualifications,” said Chris.

“I had been made redundant a few years earlier, when in my 50s. At the age of 62 and after 30 plus years in a white collar job my decision to completely change career was a difficult one. The Apprenticeship training was something I wanted to do to improve my skills and it has really benefited me.”

Michael Holdich, hotel manager, said: “Chris has shown amazing enthusiasm and passion in his work, designing and creating a six-hole golf course and getting it up and running in a very short timescale.

“He has gained further qualifications whilst working full-time on the estate, using his knowledge to recommend and suggest with confidence the way forward for the hotel grounds and estate. Chris has shown that by continuing to develop and study in a career that he changed to later in life is completely achievable and can lead to job satisfaction and reward.”