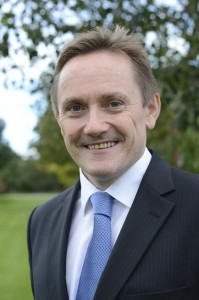 David Jones, Principal and Chief Executive of Coleg Cambria, has been awarded the OBE in the New Year’s Honours List for services to Further Education in North East Wales.

Delighted and surprised at receiving the award, he said:

“I honestly never expected anything like this to come my way. My wife and I couldn’t believe it when I found a sodden letter from the Cabinet Office in our mail box after returning from a very rainy walk a few weeks ago. It was a surreal moment that will last with us, and our dog, for ever!”

David has been in his present position since August 2013 when Coleg Cambria was formed from the previous Deeside and Yale Colleges, and became one of the largest educational institutions in Wales providing courses for over 25,000 learners.

He started his career in electronic engineering before moving to the education sector in 1987, when he was appointed as a Senior Lecturer in Electronics at the University of Wales Institute Cardiff. He added:

“I didn’t carry on in school when I reached 16. I actually went into a college like Coleg Cambria and went into engineering before I became a teacher. It just shows anything is possible. If I can do it, anyone can do it.”

“This honour really is one for everyone associated with Coleg Cambria and its predecessor colleges. I’m a Cardiganshire man, but now firmly based in North East Wales, where I’ve had the pleasure of working with some truly talented, committed, innovative and inspirational colleagues, governors and students over the past 15 years – I thank them all, and my family for all their support and kindness. I feel so proud to have achieved this recognition and I just wish my mother was alive today to share the moment”.

Congratulating David on behalf of the Governors and staff at the college, John Clutton, Chair of the Governing Board said:

“I wish to extend our heartfelt congratulations to David on being awarded an OBE. This is a well-deserved and overdue award given his significant contribution to the FE sector and to the economy in the region”.