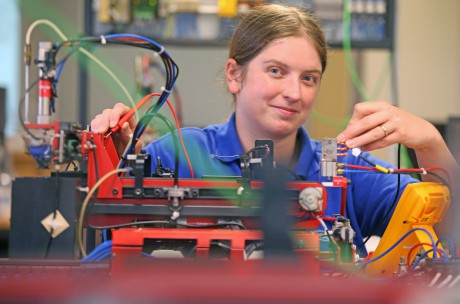 Apprentice of the Year finalist Maria Brooks is an ambassador for engineering careers.

Maria Brooks has become the first female adult apprentice taken on at Ford’s Bridgend plant, thanks to the Welsh Government’s apprenticeship programme.

Working on the production line at Ford gave Maria, 28, from Porthcawl, a deep curiosity about how engines were built, operated and controlled. Already an honours graduate in Forensic Chemistry, her four-year apprenticeship, provided by Bridgend College, will gain her a Higher National Certificate (HNC) in electrical engineering from the University of South Wales.

As a reward for her success, she has been shortlisted for the Apprentice of the Year award at this year’s Apprenticeship Awards Cymru, which take place at Venue Cymru, Llandudno on October 20.

Jointly organised by the Welsh Government and the National Training Federation for Wales (NTfW), the prestigious awards celebrate the outstanding achievements of individuals, employers and learning providers who have excelled in contributing to the development of the Welsh Government’s Traineeships, Jobs Growth Wales and Apprenticeship programmes.

Funded by the Welsh Government with support from the European Social Fund, the awards are sponsored by Pearson PLC and supported by media partner, Media Wales.

Maria said: “I have had the great fortune to work on a variety of projects during my time with the company. These have included relocating a robot to enable it to be trained in-house, and setting up an electro-pneumatic rig to support other Electrical Apprentices. This was a big project for me as it was one I could take the lead on.”

Maria has also become an ambassador for engineering careers to the next generation, helping pupils at Maesteg Comprehensive School to build an electric car from scratch. She’s also involved in a ‘girls into STEM (science, technology, engineering and mathematics)’ initiative run by the Engineering Education Scheme Wales in partnership with Ford.

Her mentor, Garry Evans, said: “Maria is on course to become a highly competent, skilled Electrical Control Specialist at the end of her apprenticeship and she will be a valuable asset to the Bridgend Engine Plant in the future.”

Wales’ Minister for Skills and Science Julie James congratulated Maria and the other 32 shortlisted award finalists. “We are proud to be delivering one of the most successful apprenticeship programmes in Europe with success rates in Wales remaining well above 80 per cent,” she said.