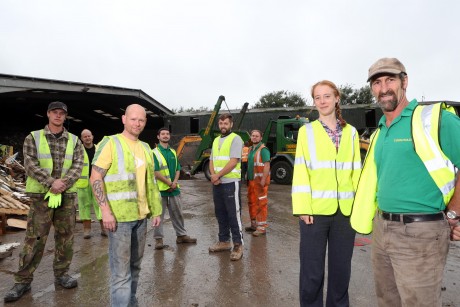 A unique approach to employment and training by an award winning company, which runs a successful waste and recycling site in North Wales, has been described by a training provider as “inspirational”.

Now Thorncliffe Abergele, a family owned company established in Abergele 1987, is in contention to win a major award at the Apprenticeship Awards Cymru 2015.

The company is one of three finalists shortlisted in the Medium-sized Employer of the Year category at the high profile awards ceremony to be held at the Celtic Manor Resort, Newport on Thursday, October 29.

Jointly organised by the Welsh Government and the National Training Federation for Wales (NTfW), the awards are sponsored by Pearson PLC and media partner is Media Wales. The Apprenticeship Programme, led by the Welsh Government, is supported by the European Social Fund.
Thorncliffe Abergele has reduced the amount of waste going to landfill from 8,384 tonnes in 2013 to 887 tonnes last year and is aiming for zero waste. The company, which has a workforce of 52, has invested in cutting edge equipment, including a new refuse derived fuel processing plant, which bales waste.

To achieve its goals, Thorncliffe Abergele launched an Apprenticeship programme, working closely with learning provider Cambrian Training Company, three years ago. The company has recruited 28 apprentices since the programme began and currently has seven working towards a Foundation Apprenticeship and Apprenticeship in Sustainable Resource Management.

Working with the Probation Service, the company provides employment and training opportunities to ex-offenders, a programme that won an Inspire! Award for best project for its positive impact in the local community.

Site manager Steve Harper has also been nominated for a Police Crime Commissioner award for his work with ex-offenders. “The project is giving employment opportunities that are enabling people to turn their lives around, gain training and new skills and provide a sustainable future for them and their families.”

Deputy Minister for Skills and Technology Julie James congratulated Thorncliffe Abergele and the other 36 award finalists. “We have some truly exceptional apprentices and learners here in Wales and the Apprenticeship Awards Cymru provide a perfect platform for us to celebrate their hard work and achievements,” she said.