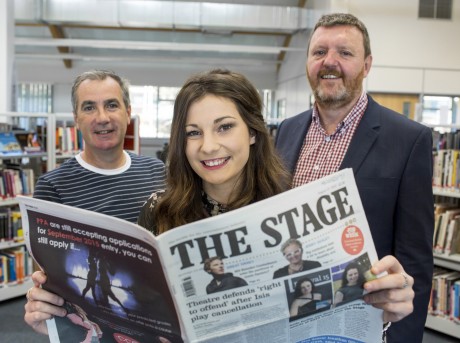 “My life is happy now and I know almost anything is possible.” Those are the words of Saffron Tinnuche who has overcome tragedy in her life to set up the prospect of a dream job as a Butlins Redcoat and she’s in contention to win a major award at the Apprenticeship Awards Cymru 2015.

The 18-year-old from Pontarddulais is one of three finalists shortlisted in the Traineeship (Engagement) Learner of the Year category at the high profile awards ceremony to be held at the Celtic Manor Resort, Newport on Thursday, October 29.

Aged only 10, Saffron was taken into the care of her aunt and uncle as her parents struggled with alcohol and drug abuse. As a result her schooling suffered as she was left with crippling confidence issues.

She was finally getting her life together, rebuilding a relationship with her mum and thriving on a Performing Arts course at Coleg Sir Gâr in Llanelli, when her mum died. She then discovered that her father had died weeks earlier.

Despite being named Student of the Year, Saffron was unable to progress to a higher qualification as she lacked the entry requirements and instead set her sights on becoming a Butlins Redcoat.

She took up a Traineeship placement through the college with a children’s play centre where she flourished in both organising and performing at parties and this experience led to an audition and a dream job with Butlins.

Now with her uncle seriously ill, Saffron has temporarily returned to her Traineeship, with Butlins keeping a place open for her as a Redcoat.

Steve Kelshaw, director of learning support at Coleg Sir Gâr, said: “I have never met anybody who is a better role model for showing other young people who face personal barriers what can be achieved.”

Deputy Minister for Skills and Technology Julie James congratulated Saffron and the other 36 award finalists. “We have some truly exceptional apprentices and learners here in Wales and the Apprenticeship Awards Cymru provide a perfect platform for us to celebrate their hard work and achievements,” she said.