Sarah and Paul appointed to lead NTfW during period of change 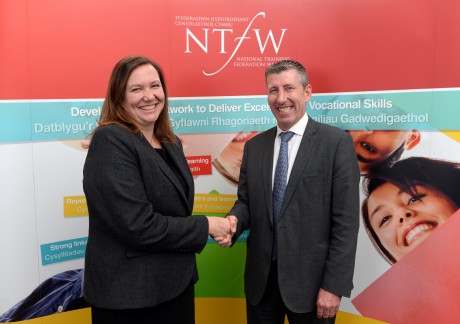 A woman who has been involved in work-based learning for 22 years has been elected chair of the National Training Federation for Wales for the next three years.

Sarah John, commercial director at Newport-based Acorn Learning Solutions, had been acting as interim chairman since the summer. Her appointment was agreed at the annual meeting of the organisation, which represents more than 100 work-based learning providers across Wales.

Vice chair is Paul Napier, 48, who is Wales director for work-based learning provider Rathbone, Originally from Pembrokeshire, he now lives in Cardiff and has been involved in work-based learning for nearly 30 years. He is vice chairman of the NTfW’s South-East Wales region.

Sarah has been an NTfW board member for two years, having chaired the organisation’s South East Wales region. She is also a member of both the South-East Wales Regional Learning Partnership board and University of Glamorgan Collaboration Forum.

Living in Bridgend, she takes over the chair during another period of change for the work-based learning sector caused by the Brexit vote, the introduction of the new apprenticeship levy next spring and a new round of tendering for Welsh Government contracts on the horizon.

She welcomed the end of uncertainty about the future of the NTfW, which has decided to continue as an independent organisation. Protracted talks about a possible merger with CollegesWales to create a new post-16 learning body for Wales, had failed to reach agreement.

“I am delighted to have been appointed chair for the next three years,” she said. “I can now work with the board on a strategic plan to move the network forward and have some clear direction in our objectives as an organisation and how we are going to achieve them.

“We have to respond to the Welsh Government’s apprenticeship policy and the Regional Skills Partnerships’ priorities. In addition, there are the City Deals in Cardiff and Swansea and we need to be engaged with the Regional Skills Partnerships to ensure we respond as a network to the emerging needs of employers, utilising the apprenticeship budget. Collaboration will be really important and it’s an exciting time.”

One of her first tasks is to take forward the NTfW’s ‘Creative Solutions’ document, which is soon to be presented to the Minister for Skills and Science, Julie James. The document proposes ideas on how the network could create more apprenticeship opportunities and career pathways in priority sectors, reflecting the future skills needs identified by Wales’ three Regional Skills Partnerships.

She is keen for the NTfW to work closely with Welsh Government officials to help design programmes to ensure that a minimum of 100,000 high quality all age apprenticeships are delivered over the next five years.

She wants NTfW members at a regional level to work closely with Careers Wales, schools and businesses. “Included in our ‘Creative Solutions’ document is the appointment of regional advocates who will be able to represent the network and work with Careers Wales and employers to showcase apprenticeships in schools,” she revealed.

“We have got to get the message out there and not rely on teachers alone to promote apprenticeships as career pathway options. We must co-ordinate activity as a network to bring in employers and spread the message to learners, parents and teachers.”

She said her immediate focus would be on updating the NTfW’s governance and constitution and engaging the whole membership of more than 100 organisations.

Paul says he is looking forward to helping to drive forward the nation’s skills and employability agenda. His career began as an IT trainer for NACRO in the early ‘90s before retraining to become a welder. He went on to spend 10 years working in the holiday industry throughout Europe.

“I am very proud to have been given this opportunity to help drive forward the skills and employability agenda in Wales,” he said. “It’s an opportunity to shape work-based learning for the future in this incredible time of transition in the sector

“We are going through a period of unprecedented change and it’s important that we have a skills and employability plan that matches the economic aspirations of local, regional and national priorities.”

He said the NTfW had developed an open and transparent relationship with the Minister for Skills and Science and was confident that the network would deliver a minimum of 100,000 apprenticeships with Welsh Government support over the next five years.

Mr Napier and his wife, Cathy, have five children and one grandchild. He’s a keen sports fan and supports Cardiff Blues and Llandaff Rugby Clubs.