Redundancy “a blessing in disguise” for Apprenticeship Ambassador

Being made redundant from his job as a print finisher in 2020, after 19 years’ service, turned out to be a blessing in disguise for Sion Jones. 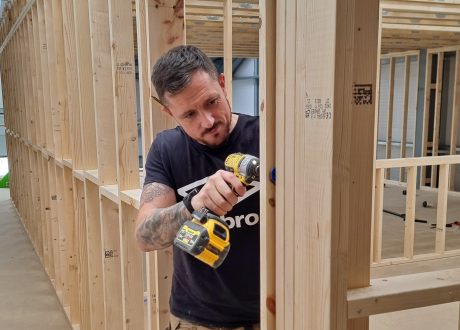 The 37-year-old father of two from Penparcau, Aberystwyth says his quality of life and happiness have improved enormously since becoming an apprentice carpenter.

Sion, who works for Owen Evans Carpentry based at Trisant, near Aberystwyth, is working towards a bilingual Level 3 Apprenticeship in Wood Occupations through City & Guilds, delivered by Hyfforddiant Ceredigion Training, having completed his Foundation Apprenticeship last year.

Due to his passion for apprenticeships and the Welsh language, he has been appointed an Apprenticeship Ambassador by Coleg Cymraeg Cenedlaethol and the National Training Federation of Wales (NTfW).

“I was disappointed when I was made redundant because I had worked for the company for such a long time,” said Sion. “However, “Personally, it has turned out to be a blessing in disguise because, although I enjoyed my job, I was unhappy with working night shifts and long hours which kept me from my family.

“My job is so flexible, no two days are the same because we work on different sites and I am home at 5pm most days. When I worked in the factory, every day was the same.”

Delighted to be appointed an Apprenticeship Ambassador, Sion said Welsh is his first language and is spoken fluently by his family, workmates and many customers.

“The Welsh language is very important to me and it’s nice that we use it when working on sites,” he added. “Many of the older people we work for are Welsh speakers who feel more comfortable talking to us in their first language.

“I am very happy to promote the language and to speak about my apprenticeship and my job. Apprenticeships are brilliant because they allow you to earn while you learn new skills in the workplace. No matter what age you are, you will definitely benefit from an apprenticeship.”

“Sion is a perfect example of what a learner should be,” he said. “I have told him he should have become a carpenter 20 years ago because he’s a natural and a hard worker.”