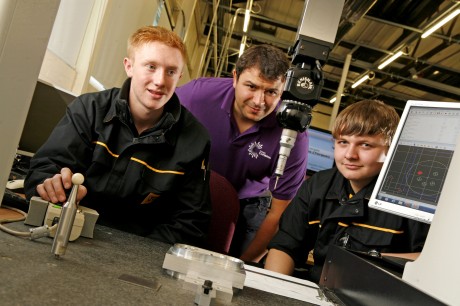 A skills consortium for Mid and North Wales has been shortlisted for two prestigious national awards.

Coleg Cambria (Mid and North Wales Skills Consortium) is one of 36 finalists in 13 categories of the Apprenticeship Awards Cymru 2013, organised jointly by the Welsh Government and the National Training Federation for Wales (NTfW).

The consortium is shortlisted for the Apprenticeship Provider of the Year accolade and the Provider Award for Social Responsiveness.

Formed in 2010, Coleg Cambria (Mid and North Wales Skills Consortium) provides learning programmes to around 1,000 learners and works with around 500 employers including large companies, such as JCB and Kelloggs.

The consortium’s partners, together with the employers they work with, have won a series of national awards for work-based learning and sharing best practice in recent years.

Driven by a ‘Strategy for Success’, the consortium services a Welsh Government contract valued at £3.2 million, with around three quarters of learners undertaking apprenticeships, while others are involved in employability traineeship programmes.

Framework success rates of 90 per cent exceed the national comparator and around half of the learners are aged between 16 and 24.

The consortium is also actively promoting learning programmes through the Welsh language.

“The consortium’s development of Welsh language responds to a real need,” said Wynne Roberts, head of work-based learning at the new Coleg Cambria. “Ten per cent of the region’s population speaks fluent Welsh, five Welsh medium/bilingual high schools are in catchment, but provision for Welsh language work based learning has been low.

“In 2012, Welsh Government revealed only 354 of 90,477 funded apprenticeships were undertaken through the medium of Welsh.”

The consortium is now working on a remedy. All of the current 131 fluent Welsh speaking learners have been identified and personally contacted, offering them the choice of following their work-based learning programmes through the medium of Welsh.