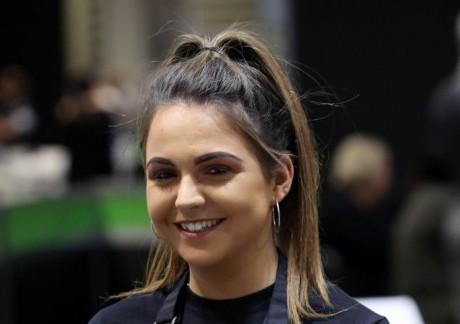 ISA apprentice Sophie Hendy has been named the best hairdresser in the UK as she won the WorldSkills UK hairdressing competition at the weekend.

Following her win, Sophie from Llandudno revealed how she had to work through the pain barrier to achieve her dream of winning gold at the Skills Show, held at the NEC, Birmingham.

Sophie tripped and injured a hand in September, casting doubt whether she would be able to compete in the final. Doctors thought she may have fractured her hand requiring a cast, but after three weeks of rest, she opted to return to work early at Tommy’s Hair Company in Llandudno with her hand in a splint and work through the pain barrier.

Right up to Tuesday last week, she was unsure whether her hand would be strong enough to compete due to muscle wastage caused by the injury. However, after dedicating hundreds of hours to practising for the competition for the past year, she refused to give up.

“On the Thursday morning of the competition, my hand was swollen and really painful, but I put an icepack on it and did the competition,” said Sophie. “We had to do five different tasks over three days which involved quite a lot of thinking on my feet and using my creativity.”

“It all went very well and I was told afterwards that I had come first in three of the tests and second in the other two. The final was of such a high standard that I wasn’t expecting to win, especially as I hadn’t been able to practise as much as I had wanted.”

Sadly, Sophie is not able to qualify for the WorldSkills UK squad because she is three months too old. Nevertheless, she plans to help the Welsh hairdresser who has qualified for the squad. She will also continue competing in national hairdressing competitions and hopes to be invited to judge at future skills competitions.

“I want to promote the WorldSkills UK competition to other hairdressers in Wales because it’s an amazing experience, opens up so many doors and you get to meet so many interesting people from the industry,” she explained.

Last year, in the same competition, she won the Sue Bleasdale Memorial Award for teamwork, empathy and kindness to others.

Sophie praised the support she had received from the company, her employer and her mentor, Adrienne Chick.

“Considering the distance she has had to travel to support me, Adrienne has given me everything. Even the judges said I had improved so much since last year, which is down to her guidance,” added Sophie.

“ISA Training have been a huge help in giving me everything I needed for training and Tommy’s has given me time off work to compete and paid for my flight and hotel for the heat in Belfast.”

She said the gold medal was reward for all the hard work and dedication over the past two years. Her dedication included converting a spare bedroom at home into a practice salon and making a regular eight-hour round trip for training sessions with Adrienne.

The success has convinced her that she made the right decision to build a career with an apprenticeship rather than going to university.

“Apprenticeships are the way forward nowadays,” she added. “You can do an apprenticeship in any type of trade and I think it’s much better to learn practical skills working on the job and gain life skills from being around people who have years of experience.”

Last month, Sophie was Foundation Apprentice of the Year runner-up at the Apprenticeship Awards Cymru final held at the Celtic Manor Resort, Newport jointly organised by the Welsh Government and the National Training Federation for Wales (NTfW).