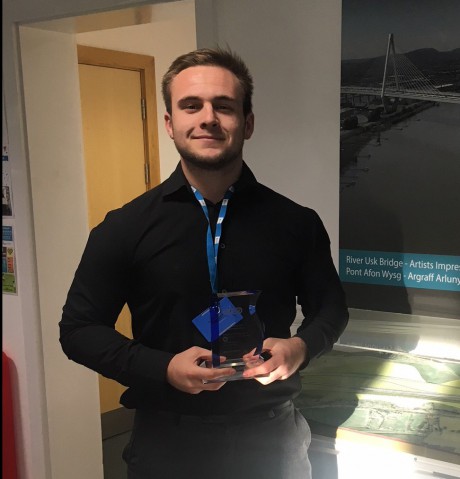 Pontypool Construction apprentice Russell Beale is celebrating being crowned the Wales Apprentice of the year at the Construction Industry Training Board (CITB) Apprenticeship Awards.

Russell was presented his award at the special ceremony which took place at Merchant Taylors’ Hall in London on November 9.

Russell, 18 is a Civil Engineer Apprentice with Vinci Construction. His attitude really stood out to the judges, with a drive to improve each and every day. He has also taken on a supervisory role following undertaking further training.

The CITB Apprenticeship Awards celebrates the achievements of CITB apprentices, and their employers. The winners were presented with their awards at a ceremony hosted by BBC News presenter, Steph McGovern.

Russell Beale said: “I’m really happy to have won – I didn’t expect it at all. Being nominated was great, but this is brilliant! I’ve learned so much in my apprenticeship and it’s been great, I’m looking forward to carrying on my studies. I’d encourage anyone thinking about starting an apprenticeship to give it a go. I would like to thank everyone at CITB and at Vinci Construction for all they have done for me.”

CITB Cymru Wales, Strategic Partnerships Director, Mark Bodger said: “As the largest provider of construction apprenticeships in the UK, it’s important that we recognise the dedication of apprentices across the UK. There is no doubt that apprenticeships provide a fantastic route into construction.Congratulations to Russell for winning the title of Welsh Apprentice of the year.”