Success in the artist’s studio 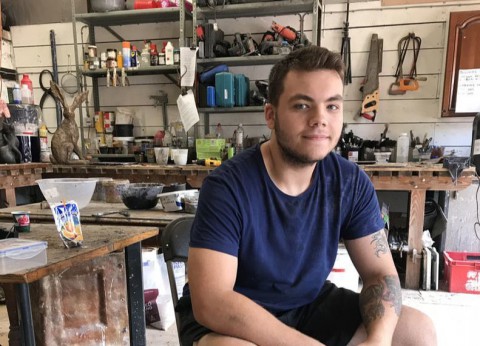 Recently, Rathbone Training partnered with artist Christine Baxter at Court Robert Arts to help her recruit an apprentice and studio assistant. After discussing Christine’s requirements, the Rathbone team matched the role with Liam Zennadi. The process was a success, and Liam proved a ‘motivated’ apprentice, who was eager to learn.

Christine noted that she ‘was able to produce more sculptures for customers thanks to Liam’, and so she was naturally keen to hire Liam full time after his apprenticeship

“I was looking for something to allow me to train a candidate and the fact that Rathbone Training paid for Liam’s first six weeks allowed me to fully train him and develop a relationship with him, and because of this he became invaluable to the business. I would highly recommend Rathbone Training” said Christine.

Equally, the experience for Liam cannot be underestimated, and he believes that it has ‘literally changed my life’. Liam was referred to Rathbone Training by Cwmbran Job Centre after visiting the service ‘looking for interview skills and a possible job placement’. Rathbone Training then discussed with Liam his hopes for the future, and tailored his experience accordingly.

Liam said that on the apprenticeship he ‘gained confidence, learnt skills & thanks to my tutor Gareth I am in an art related job which is what I was looking for.’

After his success as an apprentice and discovering his love of the arts, Liam has his ideas for the future planned out: ‘I now work at Court Robert two days a week, and I am studying at Coleg y Cymoedd three days doing a Higher National Diploma in Art & Design. Next year I start a BA Hons course in Creative Media, and I’m even thinking of doing a masters. After that my plan is to move to Norway and become a prop maker in the film industry!’

He was also really grateful to Christine’s team for being so welcoming, giving him the space to learn lots of new skills in an inspirational environment. Finally, Liam was particularly keen to thank Gareth, Josh and Debbie from the Cwmbran centre who ‘went out of their way to find the Court Robert placement for me. They have literally changed my life’.