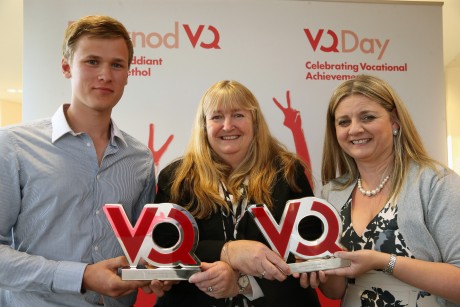 A carpenter from the WorldSkills Squad UK and the inspirational owner of three children’s nurseries were celebrating last night (June 9) after winning the main Vocational Qualifications (VQ) Awards in Wales.

Former Coleg Sir Gâr learner Simon McCall, 21, from Capel Dewi, near Carmarthen, a European silver medallist who had made it through to the WorldSkills Squad UK earlier this year, was named VQ Learner of the Year.

Jenine Gill, who employs 55 staff at Little Inspirations children’s nurseries in Llantrisant, Rhydyfelin and Barry, was named VQ Employer of the Year at the awards ceremony held at St David’s Hotel, Cardiff.

The VQ Awards, which celebrate the achievements of both learners and employers across Wales, were held on the eve of VQ Day across the UK.

Organised by the Welsh Government’s Department for Education and Skills (DfES), the National Training Federation for Wales (NTfW) and CollegesWales, the awards help to showcase individuals and organisations that have raised the standard of the services they offer as a result of vocational qualifications.

Deputy Minister for Skills and Technology, Julie James congratulated the inspirational winners and seven runners up.

“In Wales we have a long tradition of developing skills through vocational routes,” she said. “We remain committed to helping young people and employers develop the skills necessary to contribute to the growing Welsh economy.

“VQ Day reminds us just how many Welsh employers and learners are already going that extra mile when it comes to developing their skills. Each of those nominated for this year’s awards have demonstrated what can be achieved through hard work and dedication.

“Vocational qualifications are the gold standard in professional excellence and we must ensure they are recognised alongside academic achievements. The WorldSkills International competition, which takes place in Brazil this August, gives visibility to vocational education and the four Welsh competitors we have in the squad will highlight the importance Wales gives to vocational qualifications on the world stage.” 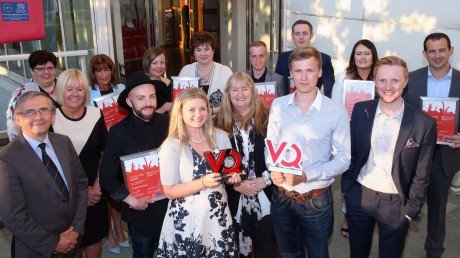 Simon McCall completed a CITB carpentry apprenticeship with Jones and Johnson, Carmarthen, studying at Coleg Sir Gâr. He was encouraged to further hone his skills by competing in regional, national and international competitions, winning a gold medal at the WorldSkills UK regional heat/ Welsh National Final last year and a silver at Euroskills in Lille, France.
Having secured a place in the WorldSkills Squad UK, he became self-employed last October and aims to employ an apprentice in September to pass on his skills and experience.

Two weeks ago, at the final WorldSkills Team UK selections, it was fellow Welshman Owain Jones who secured the only carpentry competition spot for WorldSkills Brazil 2015. Showing a strength the generosity of character, Simon has pledged to do everything he can to support his compatriot in preparations for the international competition.

“It does take a lot of commitment but not many people can say they hold a European medal and were in the Squad UK for the international WorldSkills,” he said.

To say Jenine Gill leads by example would be an understatement. The mum of two has completed a Higher Apprenticeship in Childcare and an Institute of Leadership and Management NVQ level 3 in Management.

She founded Little Inspirations in 2003 and for the past eight years has worked with training provider Educ8 Ltd who deliver courses in customer care, child care, essential skills, playwork and management training.

More than 50 staff have been through training which has led to a high level of continuity and very low staff turnover. The apprenticeship programmes are funded by the Welsh Government with European Social Fund support.

“At Little Inspirations staff are encouraged to learn throughout their careers to ensure that our children get the best care and that we perform at the highest level,” she said. “All our training is measured and as staff complete programmes we look for them to bring three ideas back into the nursery.

“Our commitment to training helps us retain and value staff who in return are motivated to learn and develop within the business.”

Runners up for the VQ Employer of the Year were Deeside-based food manufacturer Dailycer UK whose growth in recent years has coincided with a successful staff training collaboration with Coleg Cambria and professional hair salon Spirit Hair Team from Ystrad Mynach, who say vocational qualifications and continuing professional development are imperative to the thriving business.

To celebrate VQ Day in Wales, the Deputy Minister will be paying a visit to global technology giant Sony’s UK Technology Centre (UKTEC) in Pencoed, Bridgend on Wednesday morning. She will tour the plant and hear how the company’s support for the training and development of its skilled workforce has created a reputation for manufacturing excellence.