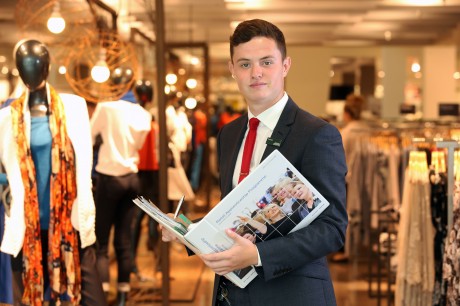 Eighteen-year-old Tom Kinsey is reaping the rewards of choosing an apprenticeship rather than following his friends into further and higher education.

The talented teenager from Newbridge, who works for the John Lewis Partnership in Cardiff, has been shortlisted for the prestigious Foundation Apprentice of the Year award at the Apprenticeship Awards Cymru 2014.

He is among 36 finalists in 13 categories who will be attending a high profile awards ceremony at the Celtic Manor Resort, Newport on Friday, October 31. The awards are organised jointly by the Welsh Government and the National Training Federation for Wales (NTfW).

With nine GCSE passes under his belt, Tom opted for work-based learning and was selected from 600 applicants for a Foundation Apprenticeship in Retail with the John Lewis Partnership in Cardiff, which was delivered by Acorn Learning Solutions.

Due to his dedication and commitment, he was named the John Lewis Partnership’s Level 2 Apprentice of the Year for the whole of the UK and has now joined the company’s branch talent management programme.

Part of the prize for winning the Level 2 Apprentice of the Year was an opportunity to spend two weeks at the company’s head office in London where he met chairman Sir Charlie Mayfield and attended senior management meetings.

“I feel that I have developed both my career and my personality in a positive way over a short period of time and can show people that further education is not always the route to take,” he said.

John Lewis Cardiff employs six apprentices and section manager Pete Riches said: “As a branch we like to challenge our apprentices and Tom has thrived in these situations. He is well known and liked across the branch and it’s a strong consensus that he will be a future leader within our business.”

Deputy Minister for Skills and Technology, Julie James said: “Apprenticeships are a great way to start a successful career. You earn while you learn and gain nationally recognised qualifications. I am delighted that employers like John Lewis share the Welsh Government’s commitment to training the future workforce and I wish Tom every success in his career.”