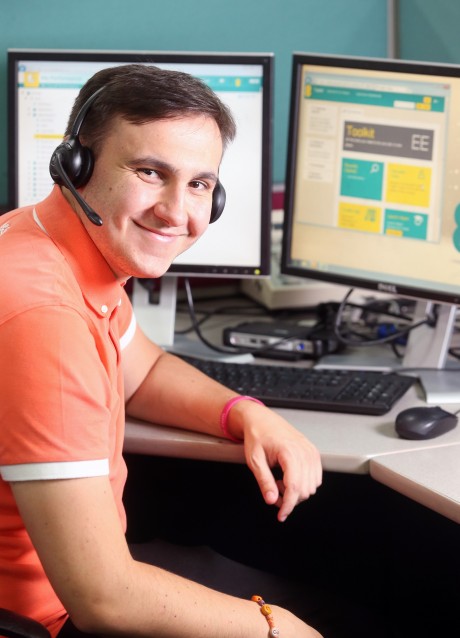 “His passion, determination, commitment and overall work ethic is demonstrated every day and leaves us in awe of what a difference one individual can make to any business regardless of how big or small.”

Those are the words of Nicola Watkins, a team leader at the EE contact centre in Merthyr Tydfil, when describing the contribution of team member Lloyd Price, who is in contention to win a major award at the Apprenticeship Awards Cymru 2015.

Lloyd, 20, who lives in Merthyr Tydfil, is one of three finalists shortlisted in the Foundation Apprentice of the Year category at the high profile awards ceremony to be held at the Celtic Manor Resort, Newport on Thursday, October 29.

Lloyd’s ambition is to become the first apprentice to secure a team leader post at EE and he’s going about it in the right way. He has already introduced a successful customer loyalty initiative which has been rolled out by the company and is the only apprentice ever to have been appointed to the company’s self-managed team.

In addition, he was selected as an ambassador to promote Apprenticeships in local schools, and is helping the company train new apprentices and has won the Best of the Best award from EE.

He is totally focused on helping EE achieve its goal of becoming number one for customer service.

He opted for a Foundation Apprenticeship in Contact Centre Operations with EE instead of going to university so that he could earn while he learned and completed the qualification in November 2014, with support from The College Merthyr Tydfil.

“The Apprenticeship with EE has impacted my life in such a positive way both personally and professionally in terms of self-confidence and building successful relationships in and outside work,” said Lloyd.

“Prior to my Apprenticeship I had no career path set out due to limited prospects in my local area. The Apprenticeship gave me a purpose and a fantastic opportunity to make something of myself. My sheer determination to accomplish all that I have in such a short space of time demonstrates my passion for EE and my Apprenticeship and now I want to give back what the company and The College have given me.”

Deputy Minister for Skills and Technology Julie James congratulated Lloyd and the other 36 award finalists. “We have some truly exceptional apprentices here in Wales and the Apprenticeship Awards Cymru provide a perfect platform for us to celebrate their hard work and achievements,” she said.