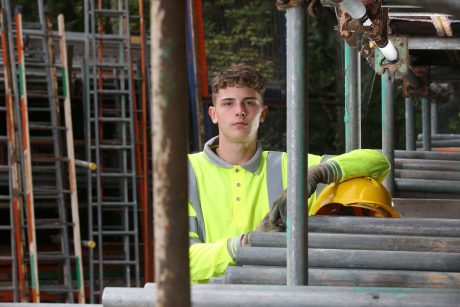 Matthew Lloyd Jones – Traineeship programme and hard work have turned his life around.

Matthew Lloyd Jones has put all the building blocks in place for a successful career, something that did not seem possible only a few years ago.

Matty, 18, struggled at school and college and was referred by Coleg Cambria to the bespoke 16-week Construction Academy Traineeship programme, which works in collaboration with the North Wales Construction Framework, The Construction Industry Training Board and local and national construction companies.

He undertook workshops in bricklaying and joinery, took part in two community-based projects where he helped to renovate Ruthin Football Club and Shotton Adult Day Care Centre, and made site visits to Wynne Construction and Redrow Construction.

As his maturity and social skills improved, he completed his Site Safety Plus Level 1 and Green Labourer CSCS Card, allowing him to go on a construction site work placement.

It became evident that Matty, who lives in Buckley, had found his niche as he thrived in the placement and has been offered an apprenticeship with a local building contractor.

Now Matty has been shortlisted for the Traineeship of the Year (Engagement) Award at the Apprenticeship Awards Cymru, the annual celebration of outstanding achievement in training and apprenticeships.

Amy Rowlands, of Coleg Cambria, said: “When Matty joined the programme he was unfocused and his attitude to learning was at an all-time low.

“He realised for him to progress he would need to work on his barriers. He recognised that this was his time to change and prove to everyone that he could succeed.

“We are all extremely proud of the journey that Matty has been on. He has matured into a respectful and inspirational young man, a positive role model for young people today.”

Matty added: “Before I joined the course, I was a different person. I hated school and college as I found them boring. Since joining the Traineeship programme, I have worked hard with all the services involved and proved to myself and them that I was able to turn my life around.”

Minister for the Economy and Transport, Ken Skates, congratulated Matty and all the other shortlisted finalists.