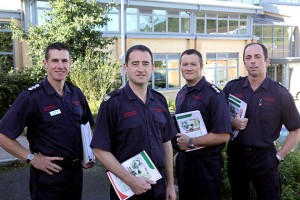 Mid and West Wales Fire and Rescue Service, which has improved its operational response to incidents by upgrading training for newly promoted crew managers, has been shortlisted for a prestigious national award.

The National Training Awards recognise the outstanding achievements of employers who have Investors in People accreditation and who have used excellence in training and skills development to impact on their business.

The winners will be announced at a high profile awards presentation ceremony at Venue Cymru, Llandudno on Wednesday, October 24, where the winners of the Apprenticeship Awards Cymru will also be recognised. The joint awards which will be attended by around 300 key stakeholders from the vocational education and training sector across Wales.

Sponsor of the National Training Awards, which aim to showcase excellence in skills development in Wales, is City & Guilds and media partner is Media Wales.

Mid and West Wales Fire and Rescue Services, a finalist in the large employer category, found it difficult to secure part-time staff, both at firefighter and crew manager level. This staff shortage had an impact on their ability to respond efficiently to emergency calls.

Station manager/development officer Craig Flannery said: “Previously crew managers had to provide a huge amount of administrative evidence. The new programme focuses on tasks and incidents that they would be expected to face, creating a more confident officer capable of making those hazardous but sometimes life saving decisions.”

Blended learning methods were used to deliver the programme, such as leadership and management workshops, e-learning presentations, practical incident simulations, as well as observation at real incidents and attendance at the National Fire Service College. Of the 78 candidates enrolled, 22 have so far completed the course and the programme saved approximately £20,000.

“The benefits have gone further than we imagined. Since the additional crew managers’ posts and the programme were created, many stations have seen an increase in the availability of their fire appliance, with a better rounded junior officer to deal with the daily occurrences encountered within a fire and rescue service,” added Craig.

Deputy Minister for Skills, Jeff Cuthbert said: “These joint awards recognise excellence by individuals, employers and learning providers in delivering training. I am delighted with the standard of this year’s finalists and the variety across all ages and sectors, which shows the strength of the skills being delivered in Wales.

“All the finalists have an inspiring story to tell and are great ambassadors for Investors in People and other programmes in Wales. The Investors in People standard helps businesses become more competitive and improves their performance and results by maximising the potential of their staff.”