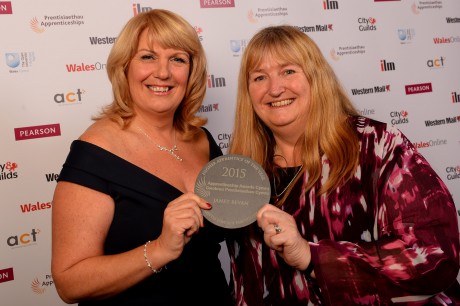 A Treorchy woman, who has rejuvenated her career at the age of 53 thanks to a Higher Apprenticeship in Leadership and Management, collected a major award at the Apprenticeship Awards Cymru 2015.

Janet Bevan, a principal occupational therapist for Cwm Taf University Health Board in Llantrisant, was named Higher Apprentice of the Year at the high profile awards ceremony held at the Celtic Manor Resort, Newport on Thursday.

“I am so proud and the award proves what you can achieve if you put your mind to it,” she said. “I wouldn’t have applied for the job I am in now without doing the apprenticeship.

“My advice to others thinking of a Higher Apprenticeship is to go for it. You are never too old to learn and I’m now encouraging my staff to do an apprenticeship.”

Janet, who was so committed to her Higher Apprenticeship that she studied while on honeymoon, already had an Occupational Therapy degree as well as many other qualifications but, in order to progress her career, needed more confidence.

She says the Higher Apprenticeship has “transformed” her, so much so that soon after starting the programme she was promoted to principal occupational therapist for the Older Person’s Mental Health Service.

“The knowledge and skills I gained had boosted my confidence in my ability to manage, so after much persuasion, I applied for the promotion,” she said. “This happened just as I got married and I had to prepare for my interview whilst on honeymoon!”

Janet managed a team of 19 staff whilst also completing her ILM Level 5 in Leadership and Management and the Management NVQ Diploma Level 5. She attended study days organised by training provider ACT Limited and met her assessor every month, but had to complete the work in her own time.

“Working full time with the additional management responsibilities, as well as completing the course, was hard but it was worth it,” she said. “I continually use the skills I have gained to improve and develop my team and the service we deliver.”

She is now planning to study for the Level 7 Management Award with the ILM.